Cadbury aim to get Lakeside shoppers into Olympic spirit

CADBURY, the Official Treat Provider to the London 2012 Olympic Games and Paralympic Games, has pledged to get the nation involved in playing more in the run up to the ultimate Games this summer!

The Games Crew will be bringing their new activation ‘Keep Singing Keep Team GB Pumped’ to Lakeside Shopping Centre this weekend, giving shoppers the chance to stand up and sing out some of the most motivating power ballads to show their support of Team GB. Games Crew will be judging and adding their own special twist with atmospheric smoke machines to set the scene for song and of course, lots of Cadbury chocolate!

Shoppers will be encouraged to take part this Saturday from 9am to 9pm and Sunday from 11am to 5pm in the Central Atrium at Lakeside Shopping Centre.

The Cadbury Games Crew events are part of Cadbury Spots v Stripes to celebrate being the Official Treat Provider for the London 2012 Olympic Games. Visit: spotsvstripes.com. 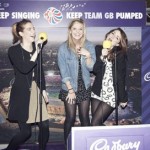