Rugby: Thurrock bury Bury but it is a close run thing 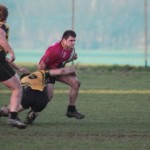 Thurrock welcomed Bury St Edmunds to Oakfield but left having run the league leaders desperately close. Thurrock are unbeaten at home this season and several of the Home supporters commented that Bury were by far the toughest visitors to date and probably gave the Thurrock faithful the best game seen their this season.

The visitors began in determined fashion, tackling positively and attacking with gusto and looked increasingly threatening. And when Bury No 8 Kearney was the victim of a high tackle, one of few that the referee penalised, Bury kicker Will Martin missed a relatively simple penalty attempt. At the 22 restart as Ian Rudgeley quickly tapped to himself and fed Michael Stanley who sped off down field and forced a line out just 10 metres from the visitors try line and despite thwarting the initial advances, the Thurrock forwards powered their way over when Ben Timson being awarded the try, with Frankie Neale adding the conversion. The visitors continued to look the better side for most of the 1st half.

Mann made good yards and was penalised at the breakdown. Martin this time made no mistake with the penalty. Bury continued stretching Thurrock out of their comfort zone and after a series of penalties, the referee had no option to yellow card Dritan Loka the Thurrock second row mid way through the half. Bury made the numerical advantage count, when a calculated downfield kick by Mann was well chased by Krammer and Flexman and their pressure on the home full back earned Martin another successful penalty. reducing the margin to a single point Bury then switched off at the re start and having made a hash of receiving the kick they then went off their feet at a ruck and were forced to watch Neale land a well struck penalty to make it 10 – 6. Thurrock then relaxed at the re start allowing Jo Davis to collect the re start and race deep into Essex territory and catch the midfield offside, this was punished by Will Martin’s 3rd successful penalty to edge the visitors back to within a point. Twice Bury kicked hard earned penalties into touch but then lost the resulting lineout. Thurrock, briefly restored to 15 men were reduced to 14 again when the referee lost patience this time it was fellow second row Aston Bevans-Royston that was sent for 10 minutes rest, Bury then added a further penalty in first half injury time to lead 12-10 at the break a lead probably deserved.

Thurrock re emerged onto the pitch, several minutes ahead of Bury, ears clearly ringing from a half time management teams chat. Despite down to 14 men the opening moments of the half and a great combination of good handling by Thurrock and some poor tackling by Bury allowed man of the match Ben Timson in support to touch down for his and Thurrock’s second try, this time however Neale missed the conversion. Both teams were now slugging it out as first one side and then the other stretched each other’s defence to the limits. In the first half it was Thurrock who could not tune in to the Referee’s requirement at the break down and in the second, it was the visitors that came under mounting pressure,. Neale pushed another penalty just wide but another Bury indiscretion saw Norry sent to the bin and Thurrock kick to the corner. A secure line out catch made, Kyle Tucker then crashed his way over from to increase their lead and deservedly so. But a crucial penalty from Martin with 15 minutes left meant that there was just one score between the two sides and with Thurrock still requiring a further try for a bonus point as well a win to keep them ahead of close rivals Colchester

Thurrock realised their proud home record was in jeopardy they continued to throw the ball about and managed to get towards half way. The ball was sent left but a super chip through from Josh Cook went straight into the arms of Frankie Neale the Bury full back could only watch in horror as the ball bounced kindly backwards allowing him to waltz in under the posts. The conversion also by Neale was the last act of the game. Thurrock are the first team this season to prevent Bury from scoring a try and whether at times they resorted to conceding a few cynical penalties, they showed why they will be firm favourites for promotion come May.

This week Thurrock face another tricky fixture when they travel to Diss also in the top 4 following this week results. Coach leaves the club at 10.30am