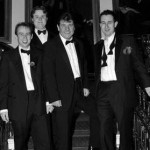 A POLITICAL aide to local MP, Stephen Metcalfe has created a storm on twitter by describing disabled protestors as “unwashed”.

He said: “I hear there are a bunch of unwashed people at Oxford and Regent Street, if you don’t like capitalism move to North Korea #UKUNCUT”

On Saturday, dozens of disabled protestors caused havoc on Oxford Street, London by chaining themselves together in protest against government welfare cuts.

Planned cuts to the disability living allowance under the bill could see 500,000 disabled people losing money, the charity Mencap said.

Cllr MacKenzie’s comments have created howls of protests on the social media site.

buckstwits said: “@CllrMackenzie Considering what happens to the disabled in North Korea (ie this sanfrancisco.ibtimes.com/articles/14810…), your comment is simply unacceptable.”

richardbridge7 said: “Wonder how “proud” Conservative MP for South Basildon @SMetcalfeMP is of his researcher @CllrMackenzie who described disabled as “unwashed””

A number of twitterers have indicated that they intend to e-mail Basildon council leader, Tony Ball in protest at the comments.

Blogger and political commentator Sunny Hundal posted an article on Saturday night which monitored changes to the councillor’s profile.

He said: “At the time his (cllr MacKenzie’s) Twitter biog stated: 25. Basildon Councillor. Assistant Member to the Leader. Work for an MP. Small State Conservative, Economic Liberal. Views expressed in my tweets are my own.

“After questioned about his tweet repeatedly, the Tory councillor changed his biog simply to: Economic Liberal. Views expressed in my tweets are my own.

“He also changed his Twitter picture to wipe any signs of his employer.”

Later on cllrmackenzie added further comment stating that his comments were: “Aimed at their tactics and idoitology of UK Uncut, I am aware that comments may have been interrupted (sic), however was not the case.”