A very lively couple of heat races set the tone for the day in the Rookie Bangers with Danny Reid rolling his car across the startline as the green flag flew for heat one. Paul Chapman also found some air time in the incident, but was stopped from rolling over by the armco barrier. Crashes were going in all over the oval with Sam Topley and Rob Haines somehow avoiding the melee for the heat wins.

A consolation event for non qualifiers saw a big crash for Topley and Tracey Warner with the latter managing a full rollover before crashing back to earth. David Cheeseman booked his place in the final with an accomplished win.

The final saw some heavy hitting with Jamie Collins getting some big damage before a badly crippled Jamie Webb, who had been driving around desperately trying to control his wayward machine, was picked up and followed into the turn three armco by Glenn Sexton, a manoeuvre frowned upon in the Rookie Banger class. After a brief stoppage to check the Grays based racer was unhurt and remove Sexton from the rest of the event, the race resumed with Rob Haines surviving a last bend attack from Chris Whiteman to take the win.

A hard hitting Destruction Derby went the way of Tom Greenstreet, who silenced Paul Cheeseman in the dying seconds.

A paltry three Stock Cars took part during the afternoon, the tragic events at Mildenhall stadium the night before where Saloon Stock Car driver, Steve Newman, was killed during the British Championship, undoubtedly having an effect on the turnout.

Their first race was just as entertaining as a 30 car race with all three having turns at the lead and Rob Buckmaster coming out on top. Effective handicapping made the other two races watchable too with Danny Rosenthall winning heat two and Tommy Langley taking his first race win in the meeting final.

The lowest turnout of the season in the Group A Stock Rods similarly saw three different winners throughout the afternoon. Each race was seemingly decided by who could first get past pole sitter, Ian Jardine. Whoever managed it first generally was able to pull away whilst the rest of the pack queued up behind the Ilford racer. Gary Hicks and Neil Wood won the heats with Matt Rowling getting well clear in the final.

A returning Roger Trickett denied Lee West a hat trick of victories in the SuperBangers with a win in the first heat. It was all about West from that point on with the sports top men, Steve Davies and Brian Jarvis embroiled in their own battles which delayed their route through the pack.

The next action at Arena Essex is over the weekend of 30th June/1st July with the Festival of Speed reverting to a weekend event for the first time in many years. The Rookie Bangers, Lightning Rods, Group A Stock Rods and Mini Stox get their share of the action on Saturday night at 6pm with National Banger Team racing, SuperBangers and Stock Cars providing the full contact race card on Sunday at 1pm. 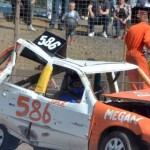