A HUGE grid of Rookie Bangers did battle at Arena Essex last Sunday for the annual Terry Skeef memorial meeting and, as usual, all the cars were painted in orange, the same colour that Terry raced throughout his Banger racing career.

At the beginning of the programme a Ladies Race kicked off proceedings and that was won once again by Claire Jones, who this time waited until the exit of the last corner before she got by the erstwhile leader Debbie Woodroffe.

Heat one for the regular Rookies saw a first win for about four years for Tilbury’s Stuart Fuller as Grant Underhill and Nicky Hammer exchanged a series of hits on turn one.

Heat two was stopped after a clash between South Ockendon’s Nick Milbourn and Ian Barley. Milbourn’s car was destroyed, but Barley had a worrying problem when his race harness came loose. Thankfully he was unharmed and was able to continue in the meeting. At the restart Jimmy Hughes lost power and drifted off and then back onto the track where he say signalling for others to hit him. They all ignored him and got on with the task of trying to win, Daniel Mann looked good for a while until Glenn Sexton blew a hose and left the track very slick and Mann spun fencewards as a result. Grays, Jamie Webb found the fence courtesy of Matthew Young whilst Jamie McAngus warmed up for the final with the win.

After countless crashes in the final, only a handful of cars were left circulating with three of them in contention for the win. Jamie McAngus used his years of Mini Stox and Banger experience to negotiate his way round the wreckage, which was littering both bends. Glenn Sexton and Kevin Richie swapped second place on a couple of occasions as they both got caught up going the wrong side of debris on turn two, eventually it was Sexton who beat Richie to the runners up spot.

Many cars returned for the pit bend Destruction Derby at the end of the meeting and it was almost too many as the chaos was difficult to follow. Brief respite came when Mark Raymond managed to roll his car off the inner kerb and the Derby was stopped briefly to help him get out of the car. When it resumed there were only a handful of cars left and the battle eventually came down to Tilbury’s Paul Harrison and DD expert Tom Greenstreet. After several crashes and a bit of cat and mouse the event was eventually declared a tie.

The Group A Stock Rod season came to a controversial end with a clash between Wayne Shackleford and Neil Wood souring the finale. With both riding high in the points Shackleford appeared to tip Wood into a spin which resulted in damage to the Wood car. Shackleford was disqualified but the clash allowed Steve Gooch – who arrived at the meeting in third place in the points, to take the points lead, although as a driver not registered with Arena Essex for the year, the track championship trophy will go to Wood. Gooch managed to hold off a bouyant Richard Haines in the Supreme Championship to take that win whilst the Terry Skeef memorial final went the way of Haines, despite initially receiving a penalty for pushing past Ray Petty. Petty sportingly accepted the pass as “just racing” and Haines was reinstated as the winner, Petty and Gooch following him home.

A few extra Stock Cars, thanks to the previous nights European Championship, saw some of the best action of the season. The Supreme Championship kicked off with an almighty crash on the first corner which saw Joey Palmer ride the fence into retirement. In truth no-one was going to catch Lee Pearce, who has made the ARena tarmac his own this season. Behind the dominant Pearce came Darren Rosenthall and Dean Kitchen. Later in the programme Pearce fenced Rosenthall very heavily on the pit bend, in what it was assumed was an attempt to wrest the track championship lead away from Rosenthall, however Rosenthall was able to continue despite the heavy impact, wrapping up the track title as a result. Paul Aylward won the remaining heats in a borrowed car.

Finally the Mini Stox started their day with a very lively race which saw a number of casualties on turn one, including novice racer Mike Dobney who found the armco when attempting to deal with a rival. Harry Steward and Lauren Overy shared the heats before going on to battle it out in the final with a brakeless, Steward managing to defeat Overy on this occasion – the lack of brakes probably helping in a Stock Car class where you can use your rivals to slow down! Connor Reeve took third place whilst track championship rivals Dan Newman and Reid Murray found themselves lapped as they didn’t trust each other not to take each other out of the race!

The next action at Arena Essex is on 21st October when the National Bangers get their last blast around the oval before the legendary Firecracker meeting in November. The Lightning Rod Supreme Championship, Mini Stox Essex Championship and the SuperBangers provide ample support. Start time 1pm. 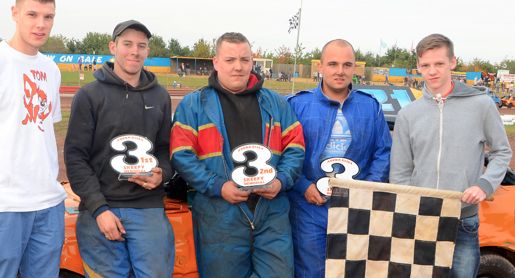