Our Heroes! Man saved from freezing river in Grays

A GRAYS man who came close to freezing to death in a river has been reunited with his rescuers – two Essex Police officers and a member of the public – who were drawn to the scene by his pet dog.

Michael Dabbs, 63, is thought to have been trapped in the river at Grays for more than two hours. 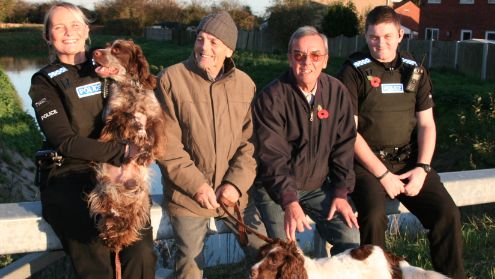 who was walking across a bridge over the river and became suspicious at the dog’s behaviour. Mr Paxton then heard calls for help and phoned 999.

Pcs Karen Pownall and Martin Swain quickly found Mr Dabbs about 20 yards away. He had fallen into the river while trying to rescue his other spaniel Ben.

After Pcs Pownall and Swain had rescued Mr Dabbs and Ben a paramedic warned that Mr Dabb’s body temperature was critically low and he was rushed to Basildon Hospital.

Mr Dabbs made a full recovery and on Monday (November 5) he met three of his rescuers at Churchill Road, Grays where the drama happened on the evening of Friday October 26.

Mr Paxton was crossing the bridge when a dog ran in front of him. He said: “I made a fuss of him because he seemed distressed. Because he had a lead on I was fearful that its owner might be in trouble. Then I heard Mr Dabbs’s weak calls from help.

“He was lucky. This road is normally quiet and on that cold and dark Friday evening no one else was about.”

Pc Pownall was the first officer to arrive. She said: “I searched along the river and found Mr Dabbs at the bottom of an 8ft high sloping bank.

“Pc Swain arrived soon afterwards and managed to get down the slope to grab Mr Dabbs who was holding on to Ben.

“Martin kept slipping so I grabbed hold of him. We both started losing our footing but luckily did not go into the water. All three of us were being stung by nettles. Then Martin and I counted to three, pulled as hard as we could and hauled Mr Dabbs and Ben to safety.”

Pc Swain added: “Mr Dabbs was suffering from hypothermia so we put him in one of our coats and wrapped him in the survival foil we carry. But when the paramedic checked his temperature it was critically low at 28C and life-threatening. Normal temperature is 37C. We were relieved to hear later that he quickly recovered.”

East of England Ambulance Service spokesman Gary Sanderson said: “Both officers’ quick-thinking and rapid intervention has no doubt saved this man’s life. Well done to both of them.”

“I am extremely grateful to everyone involved and reckon the police officers did a really good job. Smudge did a good job too. He could have run off but Springers are clever dogs.”

Pc Pownall added: “Martin and I are delighted that Mr Dabbs is OK. In this job you help people every day but it was even more satisfying to save someone’s life.

“And as for Smudge – he must have sat at the bridge waiting for someone to come along. He’s my little hero!”