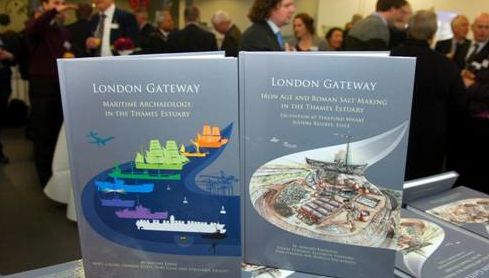 new academic books have been published which capture years of maritime and land-based archaeological work carried out by DP World London Gateway.

The new books published this week Iron Age and Roman Salt making in Thames Estuary and Maritime Archaeology in the Thames Estuary, are being published as part of London Gateway’s environmental management programme.

The book, Iron Age and Roman Salt making in Thames Estuary has increased knowledge of industry taking place during this period. Before the introduction of refrigeration, salt was a critical commodity and the excavations have provided significant new information on the technologies employed during its production and evidence of associated industries which were found to take place on what is now known as the Stanford Wharf Nature Reserve.

The site’s bone assemblage suggests that beef was being salted there and that fish sauce, a luxury commodity, was also manufactured. Findings suggest that an expansion of activity in the later Roman period may be associated with supply to the Roman army.

The published volume, Maritime Archaeology in the Thames Estuary, includes important finds related to late 19th and 20th century shipping and an assessment of the methodologies adopted during the investigations and is intended to stimulate debate on how archaeological mitigation ahead of port developments should be approached in the future.

She added: “archaeological work at London Gateway has both challenged existing policies and approaches in order to establish more effective working practices and has added significantly to our knowledge of the past.

Richard Havis, Essex County Council Senior Historic Environment Officer, said: “It has been a pleasure to work with DP World London Gateway on this project. Excellent working relationships have been established and the archaeological work has been important and carried out to a high standard”

Christopher Pater, English Heritage Head of Marine Planning, said: “The maritime archaeological investigations undertaken on this major infrastructure project have contributed to the development of archaeological methodologies and will continue to inform the conduct of similar projects in the future.”

Marcus Pearson, London Gateway Environment Manager said: “This site has been a hub for industry, trade and distribution for over 2,000 years. The recent finds of a salt making industry, for preserved meat and fish sauce, adds to the known list of industry that has taken place on the site over centuries, including trading and distribution, oil refining and storage and the site will continue its long history of international trade with London Gateway opening in Q4 2013.

In addition to the academic volumes, two popular books have been published, one on the salt making site, the other on the maritime archaeology programme. These will be available at the Essex Wildlife Trust’s, Cory Environmental Trust Visitor Centre at Stanford-le-Hope. The finds from the salt-making site will be provided to Thurrock Museum and the maritime finds will be provided to Southend Museum.

One Response to "Archaeological books published for London Gateway"