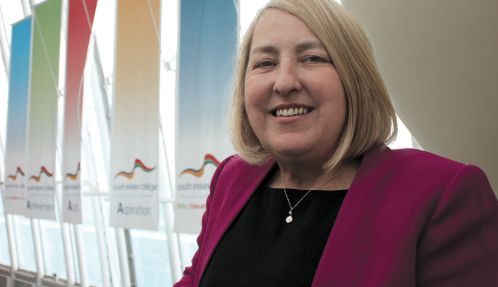 and Chief Executive of South Essex College has been recognised in the New Year Honours list by Her Majesty the Queen. Angela O’Donoghue, who joined the College in August, has been awarded a CBE for her services to Further Education.

Speaking of the accolade, she said: “I feel extremely honoured but most of all I feel privileged that someone has taken the time to nominate me. It is extremely heartening to be recognised but because I love my job and enjoy it so much, I don’t often acknowledge the work that I do makes a national contribution.”

Angela embarked on her 30 year career in Further Education at the age of 22 when she began teaching Biology part-time at a college in Liverpool. It was also there where she learned of her passion for teaching students with learning difficulties and disabilities which she continued for 17 years.

Casting her mind over career highlights, Angela cites setting-up BSix Sixth Form College in Hackney in 2001 as one of her biggest achievements. But it was at Sunderland College where Angela made an enormous impact. By focusing primarily on students’ needs she dramatically improved the quality of teaching and learning which saw success rates rocket.

She explained: “I joined Sunderland College in 2006 and in six years we grew all areas of provision and really changed the dynamic of the organisation so it became extremely innovative. We branched out into international markets and used any profit we made to offer bursaries to adults who wanted to continue in education which made a really positive impact on the local community.”

A board member of the Association of Colleges, the national Awarding Organisation NCFE and previously of the North East Local Enterprise Partnership, Angela has devoted her working life to improving standards in the education sector.

As she speaks of her career history, her passion for the industry is obvious: “I love Further Education because we offer programmes regardless of academic ability, it’s very inclusive. I love how it gives people second and third chances. I’ve seen students with such low self-esteem due to poor past experiences with education but they undertake an FE programme and achieve, often for the first time in their lives. I have seen students with no prior educational achievements undertake an Access to HE course and go on to gain First Class Honours. You can physically see it change people’s lives and that’s what I really enjoy.”

Angela is now looking forward to continuing her reign of success at South Essex College and since joining five months ago she has already driven the College to forge links with colleges in Beijing and Inner Mongolia. Ambitious plans to relocate the College’s Thurrock and Basildon campuses to town centre locations are next on the agenda.

Angela commented: “I’m excited about the huge potential South Essex College has and I’m really looking forward to raising the profile of the organisation. There are lots of exciting developments ahead including our new builds which will provide enormous opportunity for students as well as the local area.”

September 2014 will see the grand unveiling of a new £45 million Thurrock Campus in Grays town centre which includes restaurants, health facilities, shops and an advice centre. There will also be specialist workshop and studio spaces linked to courses for technology, media and creative arts, and facilities for art, design, logistics, engineering and IT courses. Key areas available for public and community use will include hair and beauty salons, a restaurant and coffee shop which are destined to breathe new life back into Grays.

Angela concluded: “At 22-years-old I thought I’d be a Biology lecturer for the rest of my career. I never would have seen myself as a Principal and certainly not a Principal with a CBE! It’s funny how life works out