CHILDREN at Woodside Academy were in awe last Friday when they met Paralympic champion Gemma Prescott during a visit organized by the Friends of Woodside. Gemma represented Britain in the London 2012 Paralympic Games where she won the bronze medal for the club throw.

Gemma is also expert in throwing both the discus and shot, previously winning bronze with the shot in the Commonwealth Games. Woodside Academy has a strong sporting tradition and has been building on this following the Olympics with more than 50 regular activities including new additions, cycling, archery and handball inspired by the London games. 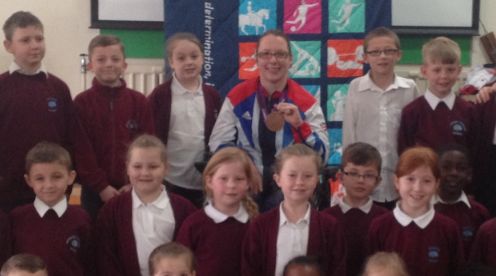 As well as being an outstanding athlete Gemma has a master’s degree in mathematics from St Andrews University. She told children how she took up athletics following a taster day and her excitement when she won her medal.

Woodside Academy Principal Edward Caines said “ We have had visits from a number of Olympic athletes before but Gemma was truly inspirational. Her triumph in overcoming her disability to compete and succeed at such a level is a lesson we can all learn from.”