Sundays Lightning Rod action was frantic with Reeves benefiting from a tangle between Steve Norman and Steve Warren, which opened a gap which was just wide enough for a Ford Sierra to fit. He then successfully defended a spirited attack from Norman for the remainder of the race, with Norman losing a couple of places in the final reckoning courtesy of the meeting steward. Norman was to have a well deserved victory of his own at the end of the meeting with a great drive in the allcomers event. Kiereen Thomas continued his great start to his Lightning Rod career with a heat win before falling fowl of a bit of needle between himself and Scott Pert later in the meeting.

Lauren Overy rediscovered her Arena Essex form with a heat and final double in the Junior Mini Stox. Another racer having a successful weekend, Lauren travelled up to the Midlands the previous evening and came away with a second place finish in the Birmingham Championship, even after admitting that she had completed a heat race with the handbrake on! With no such impediment at Arena Essex she was flying and was rapidly upgraded to the red grade for the last race of the day where she was turfed out of the lead pack by action girl, Sadie Betts. 11 year old Charlie Morphey won that race, plus one earlier in the programme to ensure an upgrading for him is also on the cards.

It looked although the 36 or so National Bangers were attempting to destroy each other on the first lap of heat one as all hell broke loose as soon as the green flag waved. Heavy damage for John Golden ended his day early and then both Haines brothers, Steve and Richard found themselves in trouble with Steve hurting on the infield after a heavy hit in the side and Richard getting followed into the wall hard by Dave Palmer. After a brief stoppage to check them out Reece Brown found himself buried hard on turn one, whilst at the other end of the track Nathan Roberts fired in Liam Friel, putting an end to his day. Jason Jackson raced to the win as the rain began to fall, nature apparently not intending to allow us a fully dry weekend at any point this year.

Heat two, with an understandably depleted field, saw Billy Crittenden on form and destroying Vic Bilky and then Grant Underhill on the pit bend. Georgie Lee took the win.

In the final it was Jamie Harding’s turn to take on the crashing credentials. He waited for victims to pass before taking them on, although Scott Cornish called his bluff on one occasion, crashing him wide. Mark Jackson was showing good spirit, taking in Danny Allen but falling victim to Alfie Lee before rejoining to get crashed by Harding on successive laps. Nathan Roberts took the win.

With the numbers firmly in the favour of the Cream Team it was always going to be tough for any other driver to win the Destruction Derby. Scott Cornish gave it a good go but successive hits from Steve Hackett and Jamie Harding left the car wrecked, although Scott was still trying to move it as the Creams turned on each other. Both Hackett and Roberts sandwiched the car of Harding, completely snapping it at the front end before Hackett and Roberts met in another bruising crash which removed the front wheel of the latter leaving Hackett as the winner.

The next action at Arena Essex is the annual Chick Woodroffe memorial meeting and Festival of Speed on 30th June. The Lightning Rods, Mini Stox, Stock Rods and SuperBangers all see action, together with the popular four man National Banger Team event. With all that racing to cram in, there is a slightly earlier start time of 1pm. 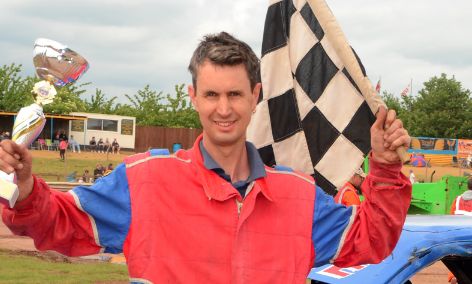