AFTER only three training sessions together the TLS football found themselves in the Basildon Soccerbility Academy Tournament.

TLS were narrowly defeated by local rivals Thurrock MENCAP 1-0 in a tight game.

TLS did even better in the last game of the day against Basildon 2s earning a well deserved 1-1 draw. Scenes of jubilation greeted the TLS first ever goal. 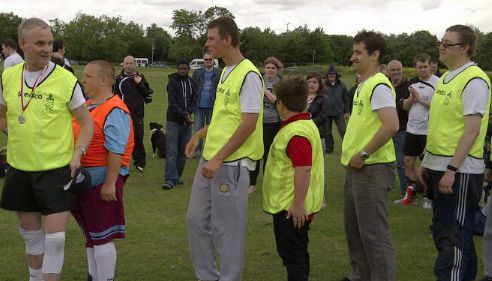 per into the net to take the lead. After Basildon quickly made it level, TLS defended like lions, Kevin “the land mine” Land making some vital tackles and Danny “the Inn on the” Green making some super saves in goal. Andrew “the corkscrew” Corkett and Gary Windett also played well in defence with Terry “the pace man” Payne playing well in all areas.

The never say die attitude of the team was very impressive and were cheered on by TLS staff and friends that came to support them.

John Smith of Basildon Soccerbility Academy and both tournament referees said that they were impressed with the commitment shown by the guys.

The players were delighted to receive medals to reward their efforts.

All of the boys said they will be back!