BORIS Johnson, was welcomed to DP World London Gateway by Vice Chairman Jamal Majid Bin Thaniah and London Gateway CEO, Simon Moore, as new figures show that the development will deliver 27,700 jobs in London and the wider South East region as well as contribute £2.4 billion to its annual GDP.

Mayor of London, Boris Johnson, said: “London is set to regain its position as one of the world’s greatest ports, and establish itself once again as a gateway to world trade. This gargantuan site will create tens of thousands of jobs in our capital and the South East, whilst helping to drive continued prosperity for the rest of the UK. DP World’s investment is a huge boost to the economy and a massive vote of confidence in London’s future.”

“We are delighted to be able to welcome the Mayor of London to see for himself the scale of the site, which is three times as large as the City of London. With some 3,500 construction workers employed every day and thousands of long term jobs to be created, this is a huge inward investment by DP World into the UK.”

London Gateway CEO, Simon Moore said: “As an island nation, we have a tradition of trading with global partners and London Gateway will ensure that this tradition continues.

“Whilst we are the UK’s new global hub port, by virtue of our location near London, this port will bring fantastic benefits to the region. We are creating work, reducing the number of lorries on our roads and saving businesses up to £200 for every container moving to or from the London and surrounding market. If you have a business that imports or exports, London Gateway makes sense on every level.” 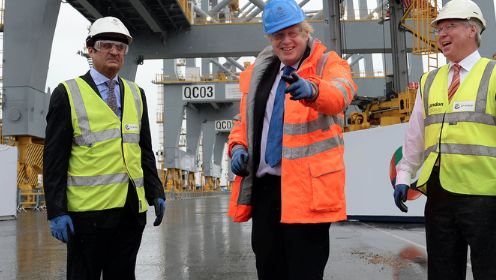 Major retailers have recognised the savings offered through London Gateway’s distinct location advantage, including Marks & Spencer, the first business to announce its use of the logistics park, when Marc Bolland, Chief Executive of Marks & Spencer, said: “As we become an international, multichannel retailer, London Gateway will help us become more efficient by cutting costs and locating our supply chain closer to our stores and our international markets. It will also help us deliver against our Plan A objectives by removing road miles and emissions from our network.”