A WAR of words has broken out between Tory and Labour councillors after bailiffs descended on a Stanford-le-Hope post office.

Conservative councillor, Shane Hebb was incensed when he heard from the owners that Thurrock Council sent in bailiffs into for “paying their monthly business rates late by five days”.

The owners, who are up to date with business rates, had missed the payment deadline but never the instalment itself.

“Undeniably one would expect businesses to pay on time. I’m on board with that, and have said so to the local post office”, says Cllr Shane Hebb.

“However, for this council to launch bailiffs onto our struggling small businesses, when it isn’t paying its own bills on time – 90 days in some occasions – it flies of rank hypocrisy.”

But portfolio holder and Stanford East councillor, Phil Smith has hit back.

Cllr Smith said: Had cllr Hebb contacted the proper officers instead of waiting until a Tuesday so he could get a headline, this issue would have been resolved even more quickly.

“He would also have discovered that we have tried and tried to engage with this particular person without success. Somehow, once the bailiffs were involved, he wanted to talk with us.

“The council does not want to use bailiffs, but sometimes that short sharp shock is what is needed. If someone is in difficulty on a particular day and wants to change the day a bill is paid – just let us know and set it up with the bank. It’s as simple as that and has been for years; it’s not a Labour thing and it’s not a Tory thing, it’s the way to do business properly. 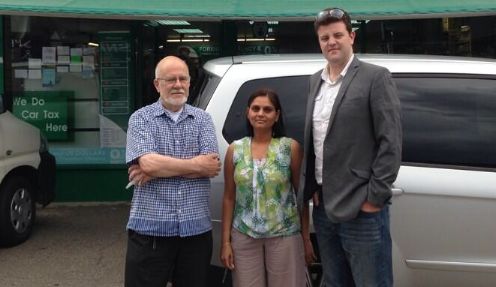 YT now understands that the bailiffs have been “pulled” and the council will be speaking to the owners to reset expectations about payment deadlines and offer advice.

Welcoming the news, cllr Hebb said: “THIS should have happened in the first place! If someone pays late, you call them and ask if there has been a problem and ask what can be done to help the payment process speed up”, says Cllr Hebb. “You do not send the heavies round, demanding a £4-grand bulk payment, because a small business is a few days late in paying.”

Challenging the logic behind the decision and Labour’s election commitments – “Labour have absolutely nailed their colours to the mast again. They campaigned on a platform of supporting small businesses, yet have sealed the fate of many businesses by selling the land at King Street off for a new supermarket, and now doing their best to prosecute small businesses, it is clear their commitments mean NOTHING!

“The fact that the council haven’t paid their own bills and yet are demanding smaller businesses do so without fault or failure is utterly hypocritical. Typical Labour – do as we say, not as we do…”