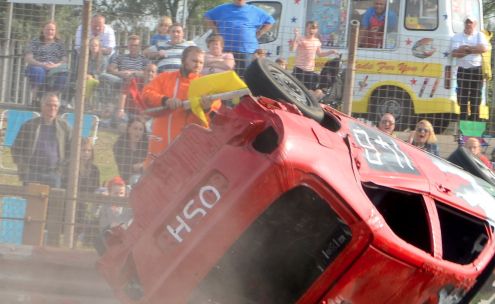 Walker won the Lightning Rod British Championship at Arena Essex on Sunday. Walker got the drop on fellow front row starter Carl Offord at the start and was never headed throughout the distance, although it was still a very dramatic race. Offord and Gary Greenland battled over second place until both clashed and fell down the order, promoting Scottish racer, Frankie Cunningham into second place. A clash between Phil Manning and Andy Reeve saw them both travel the home straight hooked together. The two managed to untangle themselves but only got as far as the next bend where Richard Warner had just dumped a load of oil and both skated into the armco. When the pack arrived at the same danger spot Peter Waite and Kiereen Thomas went straight on into the armco, the latter particularly hard, and fourth placed runner Ben Furness spun in the middle of the pack and punctured a rear tyre as he got tagged by the traffic.

The race was stopped for a major clear up operation and once this was completed the remaining three lap shootout was a tense affair. Walker wasn’t challenged as Cunningham fought hard with a damaged front tyre to hold off Lee Skoyles. Whilst Furness, with his rear tyre shredding, just fended off Robert Gamble for fourth!

The Rookie Bangers were out on force with heat one a lively affair. Aaron Lydon wasn’t letting a wobbly rear wheel put him off trying to make it round the track and he eventually tangled with Chris Whiteman on the back straight, launching the latter into the air as Lydon’s rear wheel decided he should head for the infield, no matter what his steering input. Matthew Young took the flag.

The second half of the cars took the green flag in heat two with Richard Webb hitting the armco hard on the first lap and Kerry Millen getting spun round on the back straight. The Ford Cortina of Dennis Webb took damage on the pit bend as Karl Taylor took the win. The returning Matt Fuller easily won the consolation, spinning car after car into the armco along the way.

The final saw a number of hard hits on the pit bend. Antoni Colby was looking good for victory until he clashed with a lurking Tom Waller and rolled onto his roof, bringing the race to a halt. The action was quieter at the restart and only six cars were still running at the flag with Dave Cheeseman winning from Matt Fuller and Billy Reeves.

The Destruction Derby saw some solid hits as Jamie Webb whacked Aaron Lydon and Webb was trashed by Liam Wells. Paul Sutton hit Dennis Webb, the latter surviving for a while before being rolled onto his side in another clash. Sam Watson was busy earning himself the best wrecker award with his attack on Matthew Young particularly noteworthy. Colby, Reeves and Craig Waters battled hard for the Destruction Derby win with the former pairing managing to finish each other off, leaving Waters to take the tactical route to victory

Ryan Polley caused a brief delay in the first Mini Stox heat when he got the pit bend wrong and slammed head first into the armco. Just as the red flags were waved the leading car of Joe Rollings tangled with new boy, Connor Sheldrake, and Sheldrake got the car on two wheels as he recovered.

Much like Alfie Jones at the previous meeting, Ryan was left with a pronounced limp for the rest of the day, but returned to the track later in the meeting once repairs to his car had been completed.

At the restart Rollings fell back behind Harry Steward and Connor Reeve, whilst heat two saw a similar script, Rollings this time falling back behind Dan Newman and Steward.

The final saw the top three in the Mini Stox points chart, battle hard at the front and it was Newman who further extended his point lead with victory, ahead of the repaired car of Ryan Polley, who proved the effectiveness of the repairs by passing Steward on the last turn.

The Allcomers race at the end of the day was deservedly won by Joe Rollings, who had come close to a win in every race up till that point.

The next racing action at Arena Essex is on 8th September where the National Bangers compete in a wildcard round for qualification onto the World Final grid later the same month. The Lightning Rods are in supporting mode this time round as they compete for their Essex Championship with the Mini Stox again in action. Start time 1:30pm. Before then though is the Stunt show this Saturday at 7:30pm featuring all manner of motorised mayhem including Monster Trunks, Drifting, Freestyle MotoX, Reliant Robins and a Destruction Derby.