Football: Aveley prove deadly as they put seven past Forest 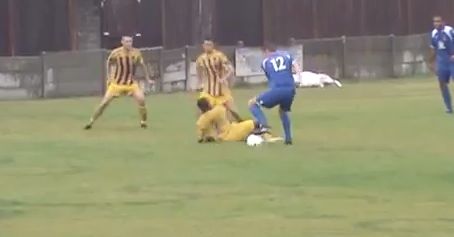 AVELEY waltzed into the next round of the F.A. Cup after demolishing a hapless Waltham Forest at Mill Field.

It took just three minutes for the Millers to open the scoring when Bradley Thomas flicked in a corner from Teddy Nesbitt in what was to be an utterly dominant first half of football from the home side.

Two goals from Ross Wall, and one a piece from Shane Oakley and Brian Okwera meant Justin Gardner’s side went into the break with a 5-0 lead.

Understandably Aveley took their foot off the gas in the second half, but still managed to notch up two more to complete the rout.

Both goals scored by Oakley led to the Aveley striker completing his hat-trick to send Gardner’s Millers comfortably into the next round where they will face Canvey Island.

Waltham Forest were hoping to put their league form behind them in this preliminary qualifying round of the F.A. Cup, a competition that was described by player/coach Adam Flanagan as “a different entity” following Aveley’s win over Brentwood on Bank Holiday Monday.

Earlier in the week Justin Gardner tweeted that he would love a cup run and within three minutes they were set on their way to the next round when Bradley Thomas put the Millers in front from a corner.

The Aveley centre back rose highest inside the six yard box to head past goalkeeper Ashley Harris after Teddy Nesbitt swung in a left footed corner.

It was the most perfect of starts for the Millers who had been slow out of the blocks in the majority of their league games prior to today, and it was about to get much better when Ross Wall doubled their advantage.

Nesbitt was once again the provider as he sprayed the ball from left to right, finding Wall in the penalty area. The midfield man brought the ball down well on his chest, before checking inside onto his left and curling the ball in to extend the home side’s lead.

Waltham Forest were putting Gardner’s side under very little pressure, allowing the blues to pass the ball round with ease, but they will feel hard done by by Aveley’s third as they will feel they should have had a penalty before Shane Oakley grabbed his first of the game.

A loose pass from Danny Hopkins went straight to Ahmed Mohammed, and in his attempts to win back the ball Hopkins appeared to bring down the Waltham Forest striker in the penalty area.

Whilst Mohammed was appealing in vain for a spot kick, Kadir Jama sent a long ball over the Waltham Forest back line and into the path of Oakley who slotted home to make it 3-0 in just 22 ruthless minutes.

With that goal the life had been well and truly been sucked out of the Waltham Forest side who had been blown away in this opening half hour, and their misery was compounded further when Wall added his second and Aveley’s fourth in the 31st minute.

A long ball from the back from Jack Giddens was flicked on by Wall out to Jama on the right hand touchline. The Aveley winger then clipped a cross into the centre which picked out Wall perfectly, allowing the midfielder to volley the ball into the bottom corner.

Aveley had been clinical up until this point, scoring from every single chance in front of the Waltham Forest goal, and their clinical finishing continued when, with their fifth opportunity, they got a fifth goal as Brian Okwera rounded off a brilliant half for the home side.

Again it was Jama who was the creator, being played in down the right by Kallon Nurudeen. The Aveley number 11 then dinked a ball round the back of a static Waltham Forest defence giving Okwera the simple task or heading in from six yards out.

Despite a five goal lead Gardner did not want his Millers side to take their foot off the pedal in the second half, whilst the Waltham Forest manager Wale Ojelbali was simply hoping for an improved performance from his team.

Ojelbali’s side did improve somewhat in the second period, but on the hour mark they went yet further behind with Oakley grabbing his second of the game, getting on the end of a well worked move between Wall and Jama.

A throw from the left from Nesbitt picked out Wall with his back to goal. Wall then fed Jama who played a lovely one two with Wall to get goal-side of the Waltham Forest back-line before his cross found Oakley a yard out to head home Aveley’s sixth of the afternoon.

All that was required to round off a perfect afternoon for the Millers was for Oakley to complete his hat-trick and with just over 10 minutes remaining Aveley’s number nine did just that to complete the scoring.

A long ball from substitute Kabir Jeetoo was picked off by Matt Waldron as the Waltham Forest captain headed down to Opeyemi Atta. The Waltham Forest centre back dallied on the ball for too long to allow another substitute, Aaron Gayle, to nip in and play the ball into Oakley whose low drive beat Harris to complete the rout.

After the game a delighted Gardner said “When you play against teams that you might see are struggling you might take your foot off the gas. It happened to us a lot last season, and I thought we were ruthless today.”

“I think they done everything perfect today. I can say for the first time this season, for 90 minutes, it was perfect all over the pitch. For once I’ve got nothing negative to say.”

Hat-trick hero Shane Oakley was understandably delighted with his hat-trick and looked ahead to the next round against Canvey Island saying “It’s going to be a massive game.”

“All the boys are going to be up and ready for it and I hope we can get through to the next round.”

Oakley summed up today’s emphatic win by saying “It’s early in the season, but a nice F.A. Cup win, through to the next round, seven goals, clean-sheet, you can’t ask for much more.”