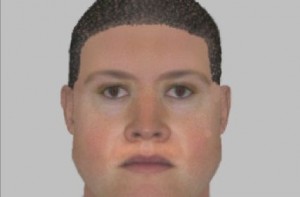 have issued an efit image of one of the suspects of an aggravated burglary in Tilbury involving two bogus council workers.

THE men knocked on the door of a house in Bryanston Road claiming they were from Thurrock Council and were doing a recycling survey.

They showed identification and were wearing Thurrock Council lanyards.

They were let in to the property at about 9.15am on Monday, September 16, at which point they produced a knife and demanded money.

The victim, who is in his fifties, handed over a three figure sum of cash, two iPod Touches, and some jewellery.

One of the suspects is a white man, aged 20 to 30, 5ft 10ins tall, and of large build. He is the one depicted in the efit. He had a shaved head, was clean shaven, and was wearing a white long-sleeved shirt, dark trousers, smart black shoes and a multi-coloured lanyard with ID in a clear plastic sleeve which said Thurrock Council. He was carrying a black record-style bag.

The second suspect is a white man, aged 20 to 30, 5ft 9ins tall and skinny. He was wearing the same type of lanyard with a long-sleeved white shirt and black shoes.

They made their escape along Sandhurst Road, heading in the direction of Moore Avenue.

Anyone with information is urged to contact Dc Steven Bailey, or his colleagues at Grays, on 101. Alternatively, call Crimestoppers anonymously on 0800 555 111.

One Response to "E-fit released of bogus council officials"