Arena Essex: No turning back for Boxer Jack 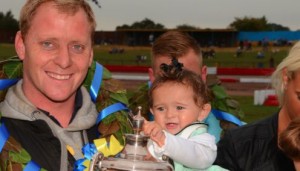 racings dominant force, Jason “Boxer Jack” Jackson has finally lifted the one title that has eluded him throughout his illustrious career. The 43rd ORC National Banger World Final on Sunday at Arena Essex went his way after a thrilling race at the Thurrock venue, with Jackson surviving a late race attempt at removing him from the lead by Joe Barrett.

Barrett had already provided much of the entertainment in the 25 lap final, including a huge burial of the Volvo powered continental racer, Dennis Vorkink. When he realised Jackson was within a few laps of victory he slowed in front of the leader, forcing Jackson to spin him round. Now facing the wrong way, Barrett drove at Jackson a couple of laps later and Jackson had no option other than to hit him to move him out of the way. Jackson’s years of experience helped him survive the attack as he ensured he hit him square with the front of the car, minimising any damage to himself. Just as Barrett regrouped for another attempt at the leader, Jackson found an ally in Nathan Roberts, who pinned Barrett against the wall until Jackson took the flag, thumping the air as he did so.

Lee Hughes came out on top of a great battle for the places with Georgie Lee and Dave Bull following him home. There were some hard luck stories with pole man Alfie Lee losing the lead early on with a puncture and Jack Tuffen being taken out of second place by a lap down Sonny Sherwood, the latter of whom had earlier qualified for the World Final by winning a last chance qualifying race, as had Nathan Roberts.

Two allcomers races, won by Dean Goodearl and Jack Foster Jnr were full of action, the demolition of World of Shale champion, Lee Clarke, by Steve Carter being particularly huge, whilst Sonny Sherwood continued to rage war with Team Cheeseburger, burying Alfie Lee this time, before Lee managed to take some revenge.

The hits rained in on the pit bend in the final race, which lead straight into a destruction derby. Amongst the carnage, Jackson took several pot shots at his nemesis in the World Final race, Barrett, whilst a couple of the continental entries were impressing with their typical never say die attitude in totally destroyed motors. George Goodearl thundered in Max Stott, Stott then falling victim to the lively Darryl Theedom, who had already ended an earlier race on his roof.

Eventually the Destruction Derby came down to a fight between Steve Carter and Andy Jones versus the Midnight Runner pairing of Scott Cornish and Jimmy Randall. The Runners were the first to falter so Carter and Jones turned on each other as well as also further destroying the very game Jein Durk Veelema, who’s steaming wreck of a car showed a brief sign of movement. Jones silenced Carter to take the win.

The 2L Saloon Stock Cars provided four great races with Lee Pearce choosing the right moment to take his first win in the class, winning the Essex Championship by a great distance from Willie Skoyles and Steve Webster. Pearce backed this up with another win in the last race of the day, surviving a last corner push from Skoyles. The heats earlier in the day were won by Michael Allard and Webster.

The next action at Arena Essex is on 6th October when the annual Terry Skeef memorial for Rookie Bangers is sure to attract its usual vast entry. The Stock Rod Supreme Championship and SuperBangers Essex Championship provide support at the usual start time 1:30pm.