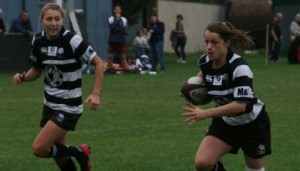 UP against a pack that was probably twice the weight and very soon fielding a makeshift back row, the T-Birds took on and dismantled a Hove side that had no answers to the power and pace displayed by the home team.

In what ended up as probably the longest rugby game on record, a noisy crowd enjoyed a fine display of running rugby as the T-Birds tried to play everything at pace despite Hove trying to do the opposite.

It was hard to tell the backs from the forwards as Ts threw the ball around and Second Row Sophia Jordan (Twin Fi) finished off a fine backs move by getting over the line with the game barely a minute old, then Rachael Burford showed her England pedigree a few minutes later with a fine solo effort and the T-birds were 12-0 up in only 5 minutes.

Hove made the most of their size superiority in the scrum, but quickly found that in the face of ferocious tackling, their only hope of making ground was with the boot but T’s slick lineout gave them no hope of winning back the ball.

Despite losing two of the back row to injury and replacing them with a winger and scrum half, Ts notched up a total of six tries in the first half with Emerson bagging two, Foy smashing through the middle and Scott slicing through the gap between 2 forwards.

The second half followed the same pattern, with Ts playing in bursts as Hove and an overly picky referee tried to stifle their play.

Despite going backwards in almost every scrum the T-Birds were superior in every other area of the game and steadily notched up trys throughout the second half.

The class of T’s backline shone through as Emerson claimed her hat trick, Cook and Radford got one each and then Dannie Harris returning from a long layoff and knee reconstruction claimed her brace showing that she has lost none of her electric pace.

With five conversions from Scott, the final score was 65-0.

With a Back Row made up of backs, players of the match were flanker Rebecca Prosser and Kat Emerson who started on the wing and played flanker and No 8 to claim her hat trick.

With a week off, Ts continue Sunday 6th October away at Bristol with the next Home fixture at Oakfield against Saracens on 13th October KO 2.30.

As always, Thurrock Ladies, the T-Birds welcome new players of any standard to their two teams.

They can promise you great training and great social life. Just turn up on a Wednesday evening at 7.30.