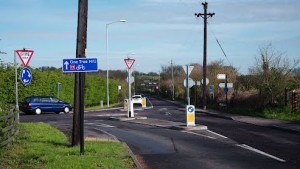 Southend Road has long concerned local residents, and a speed survey in 2011 found that over half of drivers regularly broke the 30mph limit, despite it being a residential area. The road is used regularly by residents crossing to use the bus stops, as well as children on the way to school.

Local Conservative councillors have been campaigning for safety measures for over a year, and the zebra crossing is the final stage, following additional road markings and a flashing speed sign which were installed in the spring. The local community forum asked for the scheme to be ‘fast-tracked’ in response to road works which have closed off the other main route into Corringham via the Sorrells.

Conservative Councillor for Stanford and Corringham Phil Anderson said “I am pleased to see the new crossing is finally being installed. This is something we have worked hard on over the past year, and will make a real difference for residents who need to cross this busy road, especially children and older people. Coupled with the speed signs, this is a really positive scheme for Stanford.

Conservative Councillor for Homesteads James Halden added “We have also been working to make sure that any idea of speed bumps gets blocked. They would just force traffic down the avenues and onto Branksome Avenue. This is unacceptable and thus I’m pleased that Stanford will remain free from this ‘passing the buck’ approach”.