A HARDWORKING bricklayer from South Ockendon is busy planning a secure future for himself and his two daughters after he matched five numbers and one Lucky Star in the EuroMillions draw on Tuesday 17 September 2013, banking a very welcome £256,130.20.

Colin Hopkins (48) and his two daughters, Carlie (26) and Jamie (25), are over the moon with the win and have already been enjoying plenty of celebrations with friends and family. Once the partying is complete, the three will be busy house-hunting so they can finally move out of rented accommodation and into their own home.

A thrilled Colin, said: “On Tuesday I bought a few Lucky Dip tickets for that night’s draw but it wasn’t until Wednesday morning, while I enjoyed my morning cup of tea, that I checked the numbers online. I was utterly gobsmacked when I saw all five numbers on one of my lines matched completely and then the Lucky Star. I have to be honest, there was no whooping for joy, I just sat there like a lemon for about an hour completely stunned!”

It was only when Colin came out of his daze and re-checked the ticket on his phone with the National Lottery app that he started to believe he had really won more than a quarter of a million pounds. Colin didn’t immediately call friends and family but waited for the girls to come home from work. Jamie was first back at 2.30pm after finishing her shift as a care worker in Romford.

Jamie said: “When I walked in my dad said, ‘I’ve won £6,000 on the EuroMillions’. I was over the moon and then he said he was joking and I’d better add £250K in front of the six! I just couldn’t believe it and had to resort to a fortifying glass of wine to help this amazing news sink in. We kept ringing Carlie to tell her but her phone kept going to voicemail, it was agony!”

At the end of her working day, pre-school nursery teacher Carlie switched on her phone and noticed that she’d missed lots of calls from home. Alarmed, she called thinking the worst only to get a very jolly Jamie telling her to get home quickly as they were celebrating. Carlie said: “When I walked into the house, Jamie handed me a glass of wine and told me exactly how much dad had won. It was so exciting, the two of us were screaming with excitement, meanwhile our typically laid back dad was just smiling at our madness.”

During their celebratory meal that night the trio decided to share the news with the rest of the family who popped around in their pyjamas to share in the moment and pop a few bottles of Champagne.

With the celebrations continuing the three haven’t had time to make an extensive shopping list and are not completely sure about plans for the win but one thing they are crystal clear on is a new home.

Colin said:“I’ve already taken the girls on a bit of a shopping spree and there might be a family holiday somewhere warm but really our top priority is a new house. It will be amazing to buy our own home again and enjoy the peace of mind that will bring. We’ve been in rented accommodation for more than a year and I can’t wait for the girls to be safely under a roof that is all ours.” 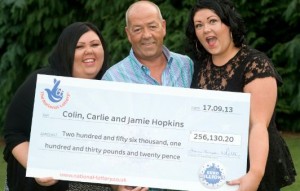