National Titles were at stake and the Junior Male Category title in the 4 x 200m was won by Thurrock Swimmers, Harry Geggus, Danny Patterson, Louie Ridgway and Jack Williams in a time of 13 minutes and 19 Seconds, they were closely followed by teammates Harry Millsom, James Martindale, Lewis Cutting and Eden Astbury in a time of 13 minutes and 55 seconds, who came in at an impressive 4th place, with Harry Millsom making his open water debut for the club.

Fellow Thurrock swimmers Tillie Geggus, Luke Crofts, Jay Pilkington and Azar Aitmarri competed in the 4x800m event and came 8th overall but first in the under 20’s mixed age group with a time of 50 minutes and 9 seconds. Thurrock swimmers had also competed in individual events the previous weekend at INTU Lakeside and again showed Thurrock Swimming Club’s open water swimmers are made of tough stuff, swimming in 14 degree water without wetsuits, 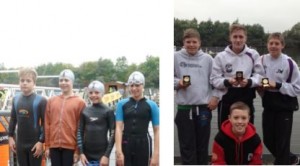 Luke Crofts and Lewis Cutting competed in the 750m event and came in joint first in their age group with a time of 11 minutes, 29 seconds, brother and sister open water swimmers Harry and Tillie Geggus competed in the 1500m and finished in 5th and 7th position for their age groups with times of 23 minutes 48 seconds and 25 minutes 03 seconds respectively, finally club welfare officer Lisa Martindale also decided to don her wetsuit and compete in the 1500m coming first in her age group with a time of 35 minutes and 56 seconds, well done to all