THE CONSERVATIVE campaign to win the by-election in Stifford Clays is focussing on concerns that Thurrock could become a London borough.

The issue has been a concern for the Thurrock Conservatives ever since the chief executive of Thurrock Council, Graham Farrant became joint boss of Thurrock and Barking and Dagenham.

Others pointed out that the assistant chief executive, Steve Cox was described at the recent Opportunity Thurrock event as the “CEO of Thurrock Council”.

The campaign contrasts with the grass-roots candidate and campaign of Labour and the euro-centric campaign of UKIP candidate, Clive Broad. 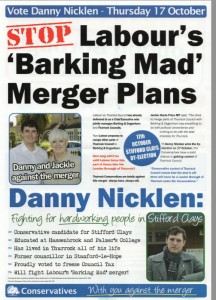 Share
Facebook
Twitter
Linkedin
Email
Print
Previous article
Blogpost: Should you be allowed to take your dog to work?
Next article
Football: Grays Ath set for toughest test of the season