Nicholas Parsons to bring Laugh a Minute to the Thameside 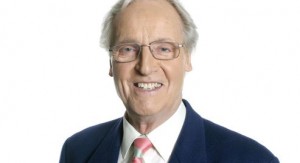 ONE of the nation’s longest serving entertainers is coming to the Thameside Theatre this month.

On Wednesday, 16 October (at 2pm only) Nicholas Parson’s Laugh A Minute Show will be on stage.

Revamped and revised from his previous show A Life in Comedy, in this anecdotal entertainment he shares his experiences of the unpredictable and fascinating aspects of life and work in the various branches of show business.

His ability as a solo performer and raconteur are a constant joy and the humorous revelations keep his audience continually enthralled.

More irrepressible, more outrageous, more surprising, more hilarious than you have ever seen him before! He has been chairman of BBC Radio 4’s Just a Minute for over 40 years, and hosted of Sale of the Century on television for a record 14 years.

Nicholas works regularly for a number of children’s charities and is a former president of The Lord’s Taverners. In 2004 he was awarded an OBE in recognition of his services to drama and broadcasting.