Report by Antony Mercer from www.pitchero.com/tilbury
Photos by Elliot Mercer 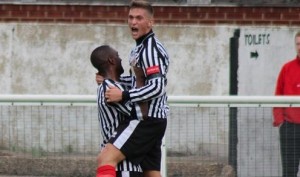 TILBURY made smooth progress in the qualifying round of the FA Trophy with there best performance of season, to beat Needham Market. On a sad day for the club following the passing of long time former Chairman and Company Secretary Robin Nash earlier in the day, Tilbury done him proud with three goals and a clean sheet.

It did not take the Dockers to get there heads in front as after only 2 minutes Harry Cook ran into the box and was brought down giving the referee no choice but to point to the spot, where in form scorer Danny Francis make no mistake, making his goal tally to an impressive 8 goals in the last 7 matches in all competitions. Cook was in the thick of the action throughout the first half and was denied on 19 when a Francis through ball found him in space. On the half hour, the same player volleyed towards goal and Rimmel Daniel had a close effort with an overhead kick.

Needham did come into the action towards the break with three good efforts, two from Luke Ingram and one from Sam Newson. On half time Chico Ramos who had just been announced a keeper of the month for the Ryman North, had to make a tip over save after a shot deflected off Sam West.

Needham came out after the break and played some good football, but a long punt up the field by Captain Sam West found Harry Cook who ran towards goal after a defensive slip and curled the ball into the net from 20 yards to score a fine individual goal and kill off Needham’s aspirations. Cook never let up and on 72 minutes was played in and again he was upended in the box and again gave the referee no option and pointed to the spot. Nathan Ashton on his home debut smashed home. Tilbury continued to look for further goals and substitutes Weemes and Babalola both had late efforts to increase the lead.

After the game Manager Paul Vaughan said “A great result against one of the best sides in our division. It has been an emotional day for the club and I had to say little to the boys who supplied a top class performance”