THURROCK Council celebrated the efforts many of its workers who have served the residents of the borough for many years.

Over 25 people were at Monday’s (7 October) event in the Civic Offices to be thanked by the Mayor of Thurrock, Cllr Tony Fish, and Chief Executive Graham Farrant.

Many who attended have been with the council for 25 years with one having completed over 40 years serving the local community.

Cllr Fish said: “I would like to thank each of you personally for the commitment you have shown to the organisation and to the people of Thurrock.

“During this time you will have seen the borough change massively and your efforts and support in the good work the council carries out should be recognised. Well done to you all.”

Each of those who attended Monday’s long service award ceremony received a certificate and shopping vouchers. 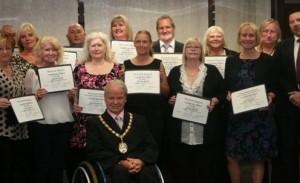