WHERE the Bad Boys Go is the first book detailing the life of an English training ship for boys.

The book launch is at the Thameside Complex, Orsett Road, Grays, Essex on the 10th October at 19:30 and is published by Thurrock Museum in Grays Essex.

The book follows the story of The School Board for London’s Industrial School Training Ship Shaftesbury, moored in the Thames off Grays, Essex, from 1878 to 1906. It begins in 1854 at her launch as the P & O passenger ship, Nubia, and closes with the auction and subsequent last voyage to a breakers yard in Holland in 1906.

Previously, little was known about the ship, its crew and some of the events that took place in and around her. The book examines the controversial purchase and refit of the Shaftesbury, stories of the successes and failures of ex-boys, and how and why some of them were sent to the ship by London Magistrates, hence the title “Where the Bad Boys Go”.

The Shaftesbury took boys from the age of 12 to 15, who were sent there to learn a trade: seamanship. The book includes events such as, the night the ship broke its moorings and ran aground in a wintery storm, the day when the Duke of York, who later became George V came to Grays to visit the ship and the tragedy that took place on that day and the discovery of a large fraud by an officer, who absconded leaving a Grays tradesman going to the Assizes wrongly accused. 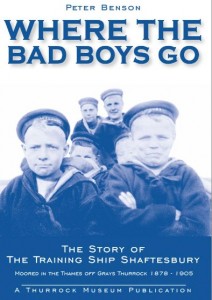 Research for the book was gathered from over 20 different sources and approximately 90 publications and documents, which include documents from the School Board for London Metropolitan Archives and Thurrock Museum.