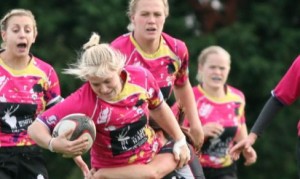 With their First XV pushing for the Premiership Title, Saracens second string are never mugs and at the start of the fixture sat second in the Championship to Thurrock. This game was a hard physical battle and I have no doubt this 8 try thriller felt a lot tougher on the pitch than the final score would suggest.

In front of a couple of hundred noisy Thurrock supporters, the early game was end to end stuff with both sides having opportunities, and in the face of committed and ferocious tackling it took 25 minutes before Ts managed to break down the Saracens defence when Forward power put prop Charlotte Micallef over the line for the first.

Minutes later, the backs were in on the act. From a turnover in their own half, Scott’s run split the Saracens defence and a simple pass put Burford in a position to break a despairing tackle and touch down in the corner.

Saracens managed to claw one back by running back a kick that missed touch and kicking through behind the defence for Shipley to score.

Despite going back in the scrums, the T-Birds were beginning to dominate most other areas of the game and the powerfully rucking T’s forwards supplied copious amounts of quick ball for the backs to run with.

As the half drew to a close, Scott again split the defence and this time scored herself before converting her own try and then Stembridge got on the end of a fine backs move to go over in the corner and finish the half at 22-5.

Helped by the over eager T-Birds conceding a string of penalties Saracens had a really good 10 minutes a the start of the second half, where they were really unlucky not to score. The defence were up on the attacking T-Birds much quicker to cut down their options and the game looked more evenly balanced.

Ts slowly reasserted their dominance and pushed into Saracens territory in search of the vital 5th try and resulting bonus point.

It came from a quick tap penalty given at a scrum and resulted in No8 Phelps crashing over the line with 3 defenders hanging off her.

Again on top the backs started to shred the Saracen’s defence and only a ball dropped on the line prevented another score.

With freezing rain now falling heavily, a shoulder injury to Saracens No8, Kavanagh resulted in the game moving pitches while she received treatment

Ts adapted more quickly and Foy and Harris both quickly claimed scores to put the game beyond any doubt, the conversions by Scott bringing the score to 41-5.

Saracens never gave up and managed to come close to another score, but Ts were ultimately the better side on the day.

Rebecca Prosser was forward of the match for the second week in a row and India Harvey back of the match.

The T-Birds are away to third in the table Trojans next Sunday 20th if anyone fancies the trip to Southampton.

Next home fixture at Oakfield against Cheltenham on 27th October KO 2.30.