LABOUR have retained the ward of Stifford Clays in Thurrock.

Local woman Sue Shinnick won the ward with a majority of just 76.

But Sue who was joined at the count by her three daughters beamed as the result was announced by the returning officer, Graham Farrant.

The win means the Labour group continue to have a majority of one in the council chamber. 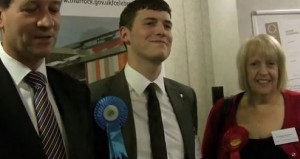 UKIP polled 504 but may well be disappointed at not getting into second place but it was an increase of on their 2011 vote of 475.

Candidate, Clive Broad left the building smiling declaring it a “Good result. I am very happy.”

An un-named UKIP source said: “The Thurrock branch has recently re-organised to go from old UKIP as this campaign demonstrates to new UKIP. The other parties should not be complacent because a new efficient election machine is getting ready for next year.

It was a better night for the Tories than many had anticipated with a hard-working and focussed campaign by Danny Nicklen retaining second place.

Whilst Labour went off into the night to celebrate, it may well be regarded as a pyrrhic victory.

Some may want to reflect that Labour may want to search their soul and ask that despite all those people nodding in agreement with them on the front doors of Stifford, folk at the moment, just don’t fancy them. That may be a challenge not only for John Kent, not only for Polly Billington but for Ed Miliband as well.

15 Responses to "Victory for Labour in Stifford Clays By-election"