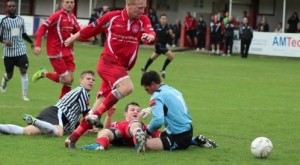 TILBURY made the trip to Kent to play Ryman South side Hythe Town and came away defeated 3-1. Paul Vaughan made 2 changes from the defeat in midweek at Heybridge, with Sam Cutler and Harry Cook returning to the side. The game also saw the 100th appearance for defender Sam West for the Dockers.

The game started fast furious and saw 3 goals scored in a 6 minute period before the quarter mark.

The Dockers drew first blood on 6 minutes when Nathan Ashton’s short free-kick saw Sam Cutler rifle home from 25 yards giving Eason no chance. The home side drew level on 9 minutes when Cloke crossed from the right and the ball fell to Josh Burchell who headed home. In the 12 minute of the game the home side took the lead when a Burchell’s corner was met by a header from Cloke that gave Ramos no chance. On 21 the effective Danny Francis got down the right and fired towards goal only to be denied by a good save from Eason.

On the half hour James Zanelli’s volley flew over as Tilbury attacked their hosts. Eason was again at his best saving another low effort by Francis on 38.

A minute later Hythe increased the lead when a free kick was whipped in by Burchell and it found Cloke, who headed home unmarked past Ramos. On the half time whistle Ashton’s free kick was well saved.

Tilbury did try to get themselves back in the game, but were denied by some stout defending as the Dockers could not break Hythe down. On 52 Cook played a lovely ball in to the penalty area where Conor Mead slipped the Hythe offside trap to run clear only before his effort was smothered.

The final period of the game was scrappy with little goalmouth action. The closest Tilbury came to scoring was a Harry Cook looping header well tipped wide by Eason. Manager Paul Vaughan said after the game he was disappointed to be undone by set pieces.