M25 Essex – Severe delays and the main road is closed, with traffic being routed around the junction and back on again, on M25 anticlockwise at J31 A1306 Arterial Road West Thurrock, because of a serious accident involving two lorries and recovery work. Congestion to J4, A21 (Orpington).

M25 Essex – Severe delays and the main road is closed, with traffic being routed around the junction and back on again, on M25 anticlockwise at J31 A1306 Arterial Road West Thurrock, because of a serious accident involving two lorries. Congestion to before J3, Swanley Interchange. 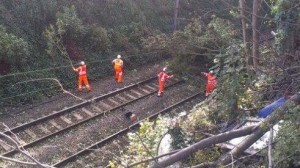 C2C state: From 13:00 we expect that services can run from Fen St to Southend C via Ockendon every 30 minutes in both directions call at all stations.

Purfleet, Rainham or Dagenham Dock: Not until Wednesday morning.

Full statement: “Owing to poor weather conditions all lines are blocked.Impact:Train services running across the whole c2c network will be suspended between Shoeburyness and London Fenchurch Street. An estimate for the resumption of normal services will be provided as soon as the problem has been fully assessed.Customer Advice:We advise customers not to attempt to travel. At several locations across our route the overhead wires are reported as obstructed or damaged and there have been various reports of debris on the tracks. We are also experiencing power and telecomms failures at some locations which may affect our distribution of information updates. We appreciate your patience in these circumstances.Additional Information:Based on advice received by Network Rail regarding the adverse weather conditions, services will be suspended until further notice. We are currently not be able to provide a rail replacement bus service owing to the expected hazardous road conditions caused by the storm and high winds. We are helping Network Rail to check the lines are clear and for damage caused to the overhead wires that supply power. We will then do our best to resume services as soon as possible. When we are able to resume train services, they may still be subject to disruption, short notice alteration and running at reduced speed.We are very sorry for the disruption this will cause you, but hope that you understand that our priority has to be everyone’s safety.” 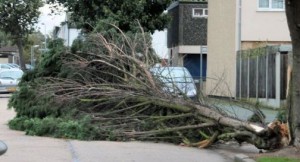 With reports of the winds speed decreasing all eyes turn to decision time for rail operators re re-opening lines.

C2C are not expected to re-open lines before midday.

Council are busy around the borough assessing tree damage.

Argent Street in Grays blocked off after concerns re scaffolding on the build at South Essex College in Grays.

Here is video collage by Rob Lay of the effects in Chadwell St Mary. 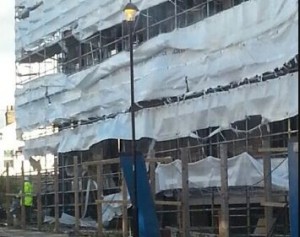 Essex Police has set up a dedicated phone number for all weather-related phone calls.

Callers are advised to use the following numbers:

People are advised to use these numbers for ALL weather calls, including those requiring an emergency response.

As per all the information below.  Bridges still closed. Train services to review at 10am.

Thurrock Council are heading to Orsett and Ockendon to assess tree damage.

Winds frequently gusting in excess if 60 miles per hour in Southern and Western parts of Essex. Worst still to come.

Diversion in operation – through the Dartford Tunnel. Congestion to before J30, Lakeside.

Dartford Crossing: queues going back to J3 on the #M25 as the QE2 Bridge remains closed to traffic. Avoid at all costs

Any commuters advised to write off today and go in tomorrow says Essex Rail Users Federation.

Highways Agency will assess Dartford bridge situation at 10am.

Tree down at end of Linford Road, partially fallen into old A13

Disruption to flights to and from Stansted airport due to poor weather. Passengers advised to contact their airline.

The Highways Agency is advising road users in the south east that the Queen Elizabeth II bridge, which forms part of the Dartford River Crossing between Essex and Kent, is expected to close in the very early hours of tomorrow morning due to the high winds. However, the tunnels are expected to remain open, and will operate in contraflow (one tunnel running in each direction) to allow traffic to still get across the Thames.

Wind speed in the area is predicted to reach the level at which the bridge has to be closed for safety some time between midnight and 03:00, but the Highways Agency will be monitoring wind speeds closely and will close the bridge only when necessary, and reopen it as soon as it is safe to do so. There is a strong possibility this will impact on the early Monday rush hour, so road users are being urged to plan ahead, check the traffic and weather conditions before travelling, and consider delaying their journeys if they are not essential.

Eurostar have cancelled all cross-channel rail services and a further 60 flights have been cancelled out of London Heathrow.

For police help, other than a genuine emergency, call 101. In a real emergency call 999 as normal.

Coastguard – 999 and ask for the Coastguard

CAUTION is being urged to travellers on the roads and railways ahead of severe weather expected tomorrow (October 27).

Winds of more than 70mph are expected to batter the region from Sunday night into Monday morning.

The Highways Agency is advising road users to check the weather forecast and road conditions before they travel.

A 30 mph limit has been placed on the Dartford Bridge.

C2C says no trains will run before 0900 tomorrow because of extreme weather conditions.

A severe weather alert has been made for high-sided vehicles, caravans and motorbikes which are advised to take extra care when travelling due to the increased risk of vehicles being blown over.

Drivers are advised to plan for their journey before they set out, checking the forecast and road conditions and to leave extra time if travel conditions are poor, and to delay their journey if the weather becomes severe.

Up-to-date information on road conditions on England’s motorways and trunk roads is available on the agency website at www.highways.gov.uk/traffic or by calling 0300 123 5000. 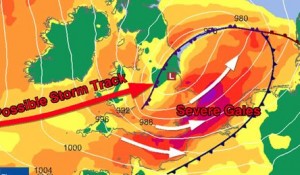 Any customers with advance purchase tickets booked for Monday will have them validated be valid for travel tomorrow (Sunday October 27) or Tuesday.

Forecasters are tracking an area of low pressure coming across the Atlantic Ocean and the Met Office has issued an “amber” weather warning for the East of England, meaning “be prepared.”