By Staff Reporter on November 2, 20132 Comments 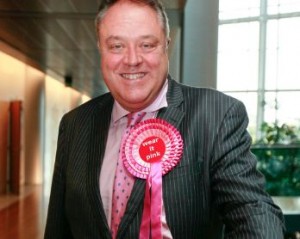 Labour MEP took the fundraising campaign to Europe and is pictured wearing his pink campaign rosette in the European Parliament.

In the last 10 years ‘Wear it Pink’ has raised a staggering £23 million and this year again people throughout the county have come together in schools, colleges and businesses to raise vital funds for Breast Cancer Campaign’s lifesaving research.

“The latest figures show that in Essex 1,135 people are diagnosed each year with breast cancer, and sadly 305 die from the disease.

“Each year in the UK around 50,000 women and around 400 men are diagnosed with breast cancer, with 12,000 women and 80 men dying each year. That is why we need to support Breast Cancer Campaign’s fundraising efforts so they can continue to fund research which will one day lead to a cure.

“I’ve called for new rules in Europe for clinical trials which will encourage and support life-saving research.

“I want to ensure that treatments can be tested and improved without unnecessary bureaucracy, and make sure large-scale cross-border trials can be carried out easily with our European neighbours.

“Breast cancer is the most common cancer in the UK and accounts for nearly one in three of all cancers in women. The Breast Cancer Campaign vitally needs the money raised from ‘Wear it Pink’ for its researchers to have the best possible chance to find the cure.”