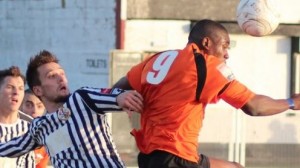 and basement side Waltham Forest shared the points in a game spoilt by the blustery conditions. Manager Paul Vaughan made 3 changes to his side, which included the return at centre half Joe Nightingill who had returned earlier in the day from Grays Athletic for his 3rd stint at the club. Waltham Forest had the best chance in a cagey opening when Menga blazed over when in front of goal. On 14 the Dockers were denied when Danny Francis had the ball in the net, but was ruled offside. Conor Mead fired over from 40 yards as the Dockers looked the likely of the sides to score. Just before the break Cutler chipped over before Piers Wixon volleyed the Dockers in front to go into the break in front.

After the break the visitors who coped better with the wind, dominated the game and this was due to the introduction of the dangerous McKenzie and it was the same player who levelled when he fired home midway through the half past Ramos. Tilbury made substitutions looking for the win, but it was McKenzie again on 85 who had a good effort. A minute later it took a wonderful Chico Ramos save to deny another substitute Lee Scott to score the winner.

After the game Manager Paul Vaughan said “It was a game we had chances to won, especially in the first half”