Football: Aveley back in play-off places 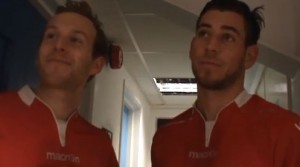 Aveley had slightly edged the first period so it was just rewards when they took the lead early in the second half, with Appiah’s goal giving them a cushion.

Despite some late pressure from the home side, Jack Giddens pulled off a remarkable fingertip save to keep his clean sheet intact.

That was until the final minute when Erith were awarded a penalty, which was dispatched by Jamie Lawrence, but it was nothing but a mere consolation as Aveley deservedly took the points.

The win sees the Millers climb from 11th to 4th as they continue to build on a recent run of good results that now sees them unbeaten in three.

During the week Aveley were made to cut their budget and as a result they were had to make do without their match winner from last weekend’s win over Sudbury, Ross Wall, as well as Spencer Harrison who both left the club.

So instead, the Millers started the match with new signing Ade Yusuff partnering Petrit Elbi up top, with their other new signing Derek Duncan on the bench.

Yusuff, who joined from Hornchurch to replace the outgoing Wall, would have hoped to have made a fast start for his new side, but it was hosts who should have taken an early lead through Ryan Flack after just three minutes.

Marcus Cassius managed to outmuscle Jay Leader to see him through on goal. The Erith number 10 dragged his shot wide, but his scuffed effort found Flack unmarked at the far post with the simple task of putting the ball into the empty net only for him to inexplicably blaze over.

After that huge let off Erith continued to look the more threatening in the opening moments of the game, with Aveley unable to force any clear opportunities.

But the momentum began to shift when Junior Appiah carved out a half chance for the Millers, but Ashley Bourne made a comfortable save. And Bourne was forced into making a point-blank reaction save when Yusuff who headed straight at the Erith goalkeeper when he really should have scored.

Aden Sherlock had the Millers backline panicking when he got on the end of a Louis Sprosen cross. Although Jack Giddens made a comfortable save the game was starting to pick up in pace with both sides now creating chances.

Some last ditch defending from the Deres prevented Elbi from getting a strike on goal after running at the heart of the Erith back line, and Yusuff will again feel he should have done better with another header eight yards from goal went over.

Luke Tanner poked an effort well wide for Erith as we approached the interval. And Flack then forced Giddens into a save low to his right as the sides reached the break.

Having arguably been the better side in the first half, Justin Gardner’s side made the perfect start to the second half, opening the scoring through Rashid Kamara inside five minutes of the interval.

Quick thinking from Elbi freed Teddy Nesbitt down the left flank. The left back’s cut-back found Kamara on the edge of the area and the Millers number seven curled a beautiful effort in off the underside of the crossbar to give the away side the lead.

After taking the lead Aveley were so close to doubling their advantage just five minutes later after Leader’s spectacular scissor kick effort was palmed onto the post by Bourne before being hacked away. And Bourne was required again seconds later as he parried a deflected Ibrahim Manasary effort round the post for a corner.

Elbi latched onto the ball following some lacklustre defending from the home side, but Millers captain was unable to hit the target as Aveley continued to search for what would have been a decisive second goal.

And after missing chance after chance in second period that they had dominated, what can’t even be considered a half chance from Appiah produced a spectacular goal.

A long ball forward from Appiah towards Yusuff was cut off by Bourne who read the situation well to come off his line. But Bourne’s clearance only fell to Appiah who from at least 45 yards out struck the ball perfectly over the stranded goalkeeper to double the Millers lead.

The hosts were now at sixes and sevens following that goal and continuously struggled to string passes together to the frustration of the home fans.

Aveley were in total control and should have put the game well and truly to bed when substitute Shane Oakley was put through but he failed to hit the target.

The aim now was to keep a clean sheet and prevent the hosts from staging a fight back and as we went into the last 10 minutes Erith had two glorious chances to force a nervy finish.

Firstly, Giddens made a brilliant fingertip save to prevent Richard Monan from reducing the arrears. And from the resulting corner Taylor Thomas missed a free header at the far post as the Millers were given another let off.

In the final seconds of normal time Giddens was again called upon, tipping Cassius’ low near=post effort wide and it looked like Aveley were going to hold onto their fourth clean sheet of the season.

Jason Twum had the chance to really put the gloss on the score line in injury time but his effort was desperately cleared off the line.

And in the final seconds of added on time, the hosts were awarded a penalty after a goalmouth scramble saw Duncan bring down Sam Gent in the box. Erith’s captain, James Lawrence took the opportunity to ruin the Millers’ clean sheet although Giddens went the right way, but it was only to be a consolation as Aveley took home the points.

“From where we were three-four weeks ago to where we are now we’ve improved so it’s good to get back to winning ways. That’s two wins in a row now, undefeated in three, so things are looking good.”

Danny Hopkins summed up the performance by saying “we played well. Knocked the ball about on a good pitch, which always suits us so it was a good win and I think we dominated.”

Ryan O’Rawe had similar thoughts on the Millers performance saying “I thought we dominated the game.

“I thought we were quite comfortable at the back, just thought we weren’t creating enough chances in the first half but second half we did and we put them away.”