TILBURY returned to winning ways to beat a struggling Ware side that only started to play in the second half. Tilbury made 3 changes to their line up with Simmonds, I’Anson and Francis starting in place of unavailable Wixon, Christou and Blackman.

Tilbury started strongly and should have been in front inside the first 12 seconds when Ashton hit wide from a Daniel cross. Minutes later Cutler volleyed over as Tilbury laid siege on Madden’s goal. Tilbury went in front on 10 when a stray back pass by Gilbert found Donovan Simmonds on his debut, which saw him brought down in the box by Madden and the referee pointed to the spot. Ware appealed that there was no contact, but the referee was in no doubt.

Aaron Waters on his 50th appearance for the club slotted home, sending Madden the wrong way to open the scoring and reward for an excellent captains performance.

The Dockers dominated up to the break and should have been further in front as Simmonds, Nightingill and Francis wasted good chances.

At the start of the second period Tilbury’s Rimmel Daniel side footed wide. On 53 Ware had a good chance when Anstead broke forward and found Hunt who off balance shot over the top. On 64 the Dockers increased the lead when a splitting Nathan Ashton through ball found Daniel in space, who shot left footed into the net. Ware never let up and got a deserved goal on 72 Ironton free kick found Tony Martin unmarked to head past Ramos.

Ware pulled a goal back on 72 when Martin headed in unmarked. Tilbury looked to increase the lead as the game finished as a stop start encounter.

Two minutes later Ware keeper made a fine save from a thunderbolt free kick from Ashton. Ware had a final chance with 10 minutes remaining when Gilbert’s header was tipped over by Ramos.

The final few minutes were littered with fouls and dissent, but saw Tilbury gain 3 valuable points to keep in touch with the teams pushing for play off places.

After the game Manager Paul Vaughan said “I was pleased with our passing today. We created good chances and pleased with the debutants”

The result sees Tilbury moving up one place to 12th. 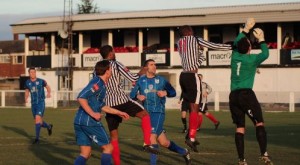