Police boss defends record of 94% of burglaries unsolved in Thurrock

THE CHIEF inspector in charge of policing in Thurrock has reacted to the news that only 6% of burglaries in Thurrock were solved last year. 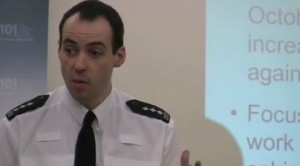 “In relation to burglary of people’s homes then Essex Police will always attend as a priority. Full enquires will be made in terms of forensics, witness enquires, any vehicles mentioned and numerous other lines of enquiry. We have good links with secondhand shops and will actively seek to conduct enquires on items stolen. Despite our best efforts and a comprehensive response and investigation burglary will remain a difficult to solve crime.

“Essex Police remains committed to intelligence-led policing to utilise the officers and resources available to us in the best possible way. Part of this approach involves a relentless perusal of those offenders who intelligence indicates are committing burglary. This approach will look at locking up and dealing with those offenders in a zero-tolerance approach for whatever crime the commit, no matter how minor.

“A good example of this as I mentioned at Friday’s PCC public engagement meeting in Thurrock was where recent intelligence led to the arrest of eight offenders across the borough in 48 hours, all of whom intelligence points to being active burglars. Although there was insufficient evidence linking them to a recent series of burglaries in Corringham and Stanford-le-Hope there was evidence to deal with them for a range of other offences, from drugs offences to shoplifting. As a result of this activity, burglaries in the area stopped and over the last eight days there have been only six burglaries in Thurrock.

“We continue to work hard to reduce this even further. This is just one example of active intelligence-led policing targeting those individuals who cause most harm to our communities. These arrests however will not show on the ‘burglary solved’ rate despite being highly effective at stopping the burglars in their tracks

Teams across Thurrock are working in a coordinated approach with partners to reduce burglary and maximise opportunities to solve crime. Again a recent example of this is my personal briefing to around 100 Thurrock Council frontline staff who will act as many extra eyes and ears across the borough whilst carrying out their day jobs, many of these staff are also local residents and have a real sense of pride in the area.

“We also have a dedicated Proactive Burglary Team as part of the CID who are actively dealing with preventing further burglaries in the area. Early indications are that since April 2013 – 25th Nov 2013 compared to the same time period last year domestic burglary has reduced by around 11.5 per cent in Thurrock, at the same time the solved rate has increased to 16.33 per cent and we continue to work hard to increase this figure.

Essex Police take all reports of crime seriously and I would encourage anyone with information to call us on 101 or 999 in an emergency. People can also provide information anonymously through crime stoppers on 0800 555 111.