Rugby: T-Birds make heavy weather of it in Hove 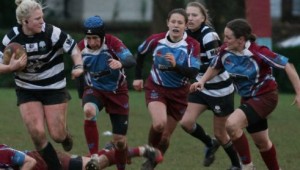 DESPITE allowing Hove to take a 2 try early lead the T-Birds were never in any real danger of letting this one slip, but they made very heavy weather of what should have been a relatively simple game.

Sitting 10 points clear at the top of the table, and having beaten the opposition 65 nil at home earlier in the season, perhaps the T-Birds were not as focussed and intense as they usually are and Hove took every advantage.

The lack of real competition in this league looked to be taking its toll as nothing quite went right for Ts in the first 15 minutes. Missed tackles and dropped simple passes allowed Hove a foothold and they then used their massive pack to dominate the scrum until they ran out of breath in the second half. With a Flanker in the centre, Ts played without their usual fluency but still managed to dog out the win in this dull and frustrating fixture.

At 10 nil down in 10 minutes, Ts turned the pressure up and Emerson’s jinking run resulted in a despairing trip and yellow card for the Hove 9.

Ts took instant advantage and over the next 10 minutes they cut Hove to pieces, with Bex Francis claiming a brace down the right wing and makeshift Centre Twin Frank making a fine run and then staying on her feet to allow Harvey and Harris to arrive and driver her over the line. A foot in touch and a tiny knock on denied 2 further scores but Ts were relatively happy to be in the lead at 10-19.

Back up to full strength, Hove used their pack to strangle the game and in the face of constant offsides, T’s were unable to find the space required for the backs to operate in. Constant knock ons, resulted in scrum after scrum and Ts best work came from turnover ball.

Into the second half and Hove should have scored as Thurrock again dropped a simple ball, their winger denied by try saving tackle from No8 Phelps.

This seemed to spur Thurrock on and finally finding a bit of fluency, the backline cut Hove to shreds from inside their own half to let Bex Francis claim her hat trick and the fourth for the team.

At 10-24, the game was pretty much beyond doubt, but Ts still stuttered and failed to fire on all cylinders just playing in bursts between silly mistakes.

As Hove cycled on the replacements and their pack ran out of breath, Ts first gained parity and then dominance in the scrum and Hove’s inability to win clean lineout ball frustrated their own efforts causing them to kick aimlessly what little ball they managed to win .

As the game entered the last quarter Ts fitness really began to show as they set off in search of the vital 5th try and bonus point. The referee finally began to penalise Hove for killing the ball at the ruck and Ts game became quicker and quicker.

Again the backs got it right with Scott, Harvey and Emerson creating panic whenever they ran at the defence and slick hands finally put Harris over on the other wing.

Again chances were missed, but the T-Birds finally nailed a 5 meter scrum and drove the Hove pack back over their own line for Phelps to get in on the scoring act.

Into the dying minutes, Ts were again on the attack and finally playing the brand of rugby that they, their supporters and coaches have come to expect. With the backs having made plenty of ground, the Thurrock crowd’s favourite Charlie Micallef repeated last week’s cheeky manoeuvre, as she joined a maul 10 meters out, collected the ball and slipped off the blindside to run in under the posts to bring the score to 10-39.

So, in Championship South, played 9 won 9, with 9 bonus points for having scored at least 5 trys each game, Thurrock T-Birds stand 11 points clear of second place Saracens with a points difference of plus 422.

The T-Birds now have a week off with the next game away at Saracens Sunday 1st December.

KO to be confirmed but expected to be earlier than usual, watch the website for details..