Christmas lights switch on in Corringham

IT ISN’T Christmas until the lights go on in Corringham! And they did on Friday as top athlete and local girl, Hayley McLean joined by Thurrock mayor, Tony Fish switched on the lights.

Entertainment was provided throughout the evening by AJ the Entertainer, while the Thurrock Spectrum Band joined local singer Louis Sorrell-Wilde in playing a selection of Christmas songs to the assembled merry throng.

And the entertainment does not stop there as this Thursday will see the town’s Christmas Festival, with music and entertainment being provided by Youth Creation, David Van Day and Sue Moxley and The Heaters. 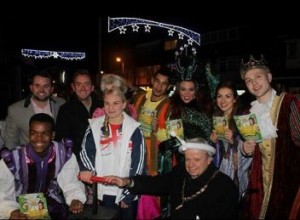 val begins at 5.30pm in the town centre.