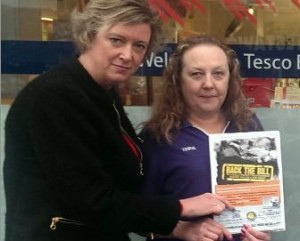 THURROCK’S Labour candidate for parliament, Polly Billington has called on Jackie Doyle-Price to ‘Back the Bill’ to legally protect shop workers against violence and abuse.

The subject has been highlighted by Ms Billington after a bill was put before parliament to make it a specific offence to assault a shop worker.

Polly said: “I understand why shop workers like Linda would like more protection under the law. People facing the public in their daily work can be subject to abuse and assault.

“It is a risk associated with their work that the law currently doesn’t recognise. I welcome Usdaw’s campaign to ensure employees facing these risks on a daily basis have greater protection under the law.

It’s disappointing that Linda and many other workers like her here in Thurrock don’t have an MP who thinks workers facing the risk of assault deserve greater protection.

A few months ago A man came behind the counter and took cigarettes and he shouted and me and told me to ‘shut my f***ing mouth’.

It was only afterwards when I realised what had happened that I realised how dangerous it was. I was really shook up and off for a couple of days I just didn’t want to come back behind the till and every time the door moved or someone moved near the door I would jump, I was on tender-hooks.

I’m just as vulnerable as the Police except they have truncheons. I would like to be protected by law because the man who
assaulted me just got away with it.”

Jackie Doyle Price tweeted a response when asked about the Bill:

“Police require more protection as they uphold the law, everyone else is entitled to the same protection.”