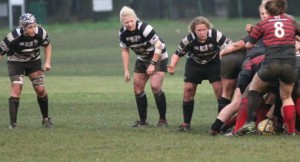 won a straight 10 out of 10 in Championship One South, the T-Birds continued their domination with a 7 try trouncing of a decent Saracens Second String to make it 11 out of 11 and put the League Title beyond doubt.

With Saracens First XV in with a serious chance of finally breaking Richmond’s recent domination of the Women’s Premiership, the requirement for a strong First XV bench means that their Second XV do not always have the strength in depth that they once displayed, but nevertheless, this was a decent Rugby team.

The team were led out by stalwart Jo Convoy, in her last ever game after 10 years a T-Bird before Monday morning knee surgery which will end her Rugby career.

Against the wind and up the slope, the T-Birds began with all guns blazing and played at a pace that Saracens could not match, their defence constantly stretched. Only the lack of accuracy in the final pass prevented T-Bird trys in the first few minutes as they attacked from any part of the field whenever opportunities appeared.

On the 10 minutes mark with Saracens trying to defend wide after 2 attacks on opposite wings, Emily Scott, slipped through a midfield gap to open the scoring and converted her own try for 0-7.

Saracens tried to respond, but failed to match Thurrock’s intensity and physicality. Setting up camp inside Saracens 22, T’s were deemed held up over the line twice before Captain Mercedes Foy took the ball on the charge and dragged 2 tacklers over the line with her, this time leaving the referee in no doubt that the ball was down. Again Scott bagged the extras for a score of 0-14 that continued until half time.

With Thurrock’s pack gradually exerting its dominance and the midfield trio of Scott, Burford and Harvey repelling all efforts, Saracens repeatedly tried to go wide, only to find themselves cut down there as well.

Now with the slope and the wind in their favour, Thurrock once again put together a spell of Rugby that has made them untouchable in this league. 3 trys in just over 10 minutes put the game beyond doubt and secured the win, the bonus point and the League title.

Attacking and winning back the ball from their kick off, Ts pressed immediately and threatened to score. An attacking lineout in the corner led to the familiar catch and drive maul to which Saracens had no answer and No 8 Claire Phelps notched up the second score for the pack.

With Scott now using the wind to kick for territory, Saracens had a drive of their own and pushed Thurrock 20 meters up the pitch only for T’s Lydia Beard to suddenly pop out with the ball. A huge midfield carry from Foy set the attack on its way and as the Saracens’ defence was pulled in all directions a cheeky inside ball from Micallef put Harvey in almost under the posts.

A few minutes later with Saracens trying to run out of their own half, Beard once again popped out of a ruck with turnover ball and Foy’s huge pass set the move going wide on the left. Harvey continued the move from her knees and Scott popped up on the wing to skin the defence. Converting her own try she brought the score to 0-33 with nearly 30 minutes of the game still remaining.

In the frustrating 15 minutes that followed, all but one piece of Saracens’ possession came from the referee’s whistle. Every time Ts won the ball, he gave it back to Saracens, but now second best in every department, they failed to score.

Finally with Scott turning over a ball in the tackle on Saracens 22, Ts attacked again in waves. Each push for the line dragged the defence narrower and simple hands put Harris in unopposed out wide for 0-38.

With both sides using their bench, Saracens had the best of the last 15 minutes. They camped repeatedly on the Thurrock line but could not breach the thin black and white line.

As the clock ticked down, Ts offensive defence pressurised Saracens into dropping the ball, a kick through and chase to the half way line secured the loose ball and Bex Francis set off to outstrip the despairing defence and round the game off at 0-43.

Players of the match Claire Phelps and Georgie Cook

Next home fixture at Oakfield against Trojans Sunday 22nd December KO 2pm. This will be followed by an Essex men’s Under 20 fixture under lights, so if you fancy some pre Christmas Rugby, see you at Oakfield.