The Great Save the Corringham Green Belt Debate

A HISTORIC debate took place at Thurrock Council last night (Wednesday) when a member of the public led a debate into the issue of a planning application to build on the green belt in Corringham.

Having presented an authentic petition of 1500 signatures, Mr Malit Sandu led the debate with a five minute speech on the application.

He was then followed by a twenty minute debate in which councillors from a number of sides supported their cause.

What was perhaps significant was the word of caution by Independent East Tilbury councillor, John Purkiss who told the chamber that their greatest fight may be with the secretary of state, Eric Pickles.

Others pointed to the fact that the five councillors who voted in favour of a similar planning application (The Aveley Firemans Club application) did not speak.

Here is a fifteen minute film of the debate. 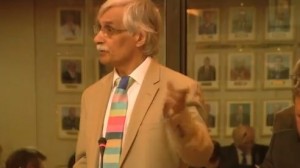 3 Responses to "The Great Save the Corringham Green Belt Debate"