HOMESTEADS councillor, James Halden lead a debate this week on a possible road link between Canvey Island and Corringham.

Thurrock Conservatives are staunchly against the proposal.

The plans, if passed, could see a road built to link Northwick Road, Canvey, to Manor Way, Corringham.

Cllr Halden led the way in speaking for the motion.

This was followed by a number of speeches from councillors on all sides of the chamber.

Perhaps the pithiest comment was by Labour councillor Phil Smith. The Stanford East councillor cheekily suggested that perhaps a no left turn sign could be placed for lorries as they left DP World! 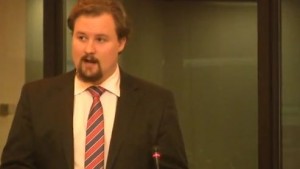