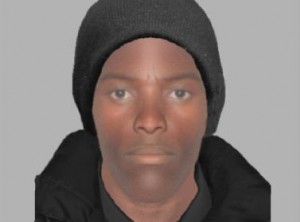 are looking to identify a man from an efit they are releasing who they want to speak with in connection with an allegation of assault in Grays.

A 13-year-old boy was assaulted by a group of three men on Belmont Road between 6-7pm on Monday, January 20. The boy was slapped and punched in the face several times, but did not require any medical treatment.

Senior Investigating Officer, DI Anne Cameron, said: “We want to establish a motive behind this assault and so need to identify and speak with this man as a matter of priority. As well as wanting a name of the man shown in the efit, we are also keen to hear from anyone who saw three black men on Belmont Road or at Grays Beach last Monday evening.”

The man in the efit is described as black, is in his late 20s and was wearing dark jeans and a black woolly hat while his accomplices are of similar description. They drove off in a dark BMW which had darkened rear windows.

Anyone with information in connection with this assault is urged to contact detectives at Colchester’s Major Investigation Team on 101, email them on SCDappeals@essex.pnn.police.ukor call Crimestoppers anonymously on 0800 555111.