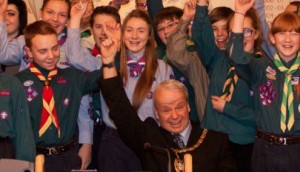 Chamber at Thurrock Council’s Civic Offices in Grays is no stranger to being full and the evening of the 20th January was no exception. But this time, rather than Councillors, Scouts from both Thurrock and Stanford-le-Hope Districts were filling the seats for their annual celebration of Jack Petchey Award winners.

23 young people and 3 adults along with their leaders and parents were present to receive their gold medallion, framed certificate and Jack Petchey Foundation pin badge. Each winner also had the chance to talk about what they had achieved to receive the award. They have also previously received a monetary award which is donated to their group for an activity of their choice.

Councillor Fish spoke about how during his term as Mayor he has seen just how much Scouting in Thurrock has a positive effect on the young people of the Borough and even the Borough itself, and how humbled he is with the great work the Leaders and supporters of Scouting put in to make such a difference to those young people. He then invited the award winners into the Mayor’s parlour for light refreshments.

After the evening Graham Monk said, “It’s amazing to see the achievements of these young people celebrated and praised; it shows exactly how much of a difference Scouting can make to someone’s life. It’s also great to see the two Scout Districts of Thurrock work closely together at an event like this. It bodes well for the merger of the two Districts in the near future which will provide a single, unified Scouting experience to young people across the whole Borough of Thurrock.”

Thanks go to Thurrock Council and the Mayor for allowing the use of the Council Chamber and special thanks go to Olive Clay, Thurrock’s Jack Petchey Awards secretary for not only organising the evening, but also for all the work during the year that is required to run the award scheme.