THURROCK T-Bird and William Edwards teacher, Mercedes Foy played a key role in the victory for England over Aberdeen by 63 points to 0.

Captain Katy McLean led the way with 13 points as England women got their Six Nations title bid back on track with a crushing 63-0 victory over Scotland.

The visitors recovered from their 18-6 defeat by France in their opening match in style, scoring 11 tries in Aberdeen.

England face reigning Grand Slam champions Ireland at Twickenham in their next match, on 22 February.

McGilchrist capped her return from injury to score after just six minutes as England eased into a 29-0 lead at the break.

Skipper McLean led by example after the restart with a 49th-minute try as Scotland, who were thrashed 59-0 by Ireland in their opening game, struggled to handle England’s pace and power.

The Scots were tested still further as England’s replacements contributed to some powerful scrums and drives, which the hosts could not handle.

Indeed Scarratt and Alphonsi both scored after good work by the forwards before Allan, Hemming and Gallagher rounded off proceedings. 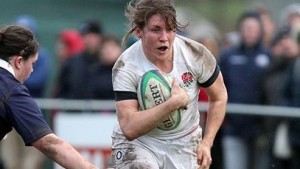