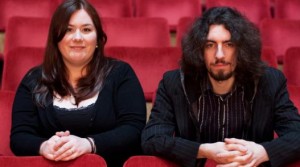 THIS Sunday, 2nd March, sees the 86th Academy Awards taking place in the Dolby Theatre in Hollywood and the organisers of the Thurrock International Film Festival are not missing out on the biggest night in cinema.

Benjamin Scarsbrook and Natalie Williams will be live tweeting the Oscars from start to, bleary-eyed 5am, finish! And they invite you to join in.

“We stay up every year and watch the Oscars live and decided this year to tweet along with the ceremony,” Says Natalie, “It’s the most anticipated night in the film calendar and we look forward to it all year.”

“We especially wanted to tweet them to celebrate the fact that last year saw the first person from Thurrock to win an Oscar.” Says Ben. Last year Julie Dartnell, who attended Hassenbrook School, took home the award for her work on the musical smash Les Misérables

The Oscars, which start at 1am in the UK, will be hosted by American comedienne and actress Ellen DeGeneres who hosted the ceremony first in 2006.

Entries for the third Thurrock International Film Festival (to be held in September) are now open and will close on 1st June. Entries from Thurrock receive a special entry rate and past judges of the short film competition include Frances Fisher (Titanic), Kevin McNally (Pirates of the Caribbean) and Thurrock born director Mick Jackson (The Bodyguard, Volcano, L.A. Story).

If you would like to join in with TIFF’s Oscar tweets follow them on Twitter @thurrock_film and use the hashtag #TIFFOscars
More information on the festival can be found at www.thurrockfilm.com