Tories question the price of a sausage sandwich (Is it red sauce, brown sauce or no sauce at all?) 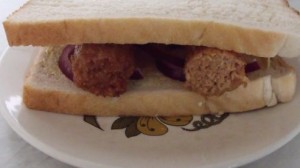 THURROCK’S Tories have succeeded in their demand for a review of the council’s ‘ridiculous and bureaucratic’ approach to setting fees and charges.

The call came after the council published a densely packed 57 page document listing every single item the council charges for as part of this year’s budget. Some items cost less than a pound but have still been set via a complex and bureaucratic process over 6 months involving reviews by council directors, scrutiny committees, the cabinet, and finally all 49 elected members at full council.

“The council’s approach to setting fees and charges reveals much about what is wrong with the modern public sector. We have used the same longwinded and bureaucratic process to set everything from five-figure planning and licensing fees to the price of a sausage sandwich at the Culver Centre canteen.

“For big ticket items where people have no choice but to pay up, it is right that we use a thorough and transparent process. But for the myriad of commercially traded services that the council provides in its various facilities, local management should be free to set prices in exactly the same way that any small business would. No wonder so many of our council facilities run at a loss if this is the approach to decision making that we are foisting on them.

“I am pleased that we have gained cross party agreement to sort this out once and for all. Hopefully next year we will see a greatly reduced list of centrally set fees and charges, and a new injection of freedom and entrepreneurialism into council run services at local level.”

“When a report lists the 70 pence cost of a 10 minute session on a bouncy castle you know the Council is still tied up in too much red tape! It just highlights that we need to focus on what is really important rather than commercially variable charges which amount to just a few £1000 or so income per year.

I am also hoping that this review will lead to Thurrock calling on government to set less fees centrally in future. This will mean local Councils will have more flexibility to charge what is right for them. In some cases we might want to charge more to deter activities which don’t fit well locally, while for others we could cut them to boost the local economy. Conservatives believe in localism, and this is one more way that the government could put that commitment into practise.”