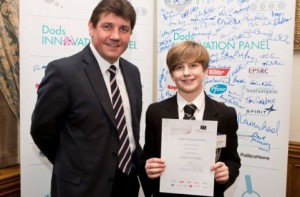 STEPHEN Metcalfe, local MP for South Basildon and East Thurrock, met with Gable Hall student Samuel Partridge at the We Made It! awards ceremony in Parliament to congratulate him on winning the local round of the manufacturing competition.

The We Made It! competition encouraged school students up and down the country to submit designs for a new manufactured product to be built. The awards celebrated the innovative spirit of the students who entered from across the country and also saw the introduction of a report which provides guidance on securing a successful future in outstanding innovation in Britain.

Samuel was chosen for his idea and design of a set of headphones that folded and converted into portable speakers. He was awarded with a certificate signed by the local MP and had the opportunity to meet other young participants. He also saw the unveiling of the prototypes of the products of the 7 overall national winners.

Mr Metcalfe commented: “It was fantastic to finally meet Samuel and to congratulate him on his brilliant design. I hope that he, and every young person in attendance, was inspired and encouraged to pursue their interest in manufacturing and engineering.”

“I hope that next year’s competition will be even bigger and better in South Basildon and East Thurrock and I look forward to welcoming another budding young designer to Parliament next year.”