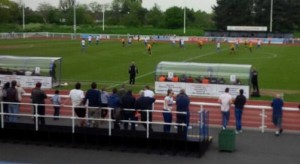 EAST THURROCK go into the final game of the season still with hopes of not being relegated after a great 5-3 away win against Enfield Town at the QE2 stadium.

Enfield earned the first corner in under a minute. The corner was fired over and an unchallenged Ryan Doyle fired in a volley to put the home team ahead.

The Rocks fought back. Neil Richmond danced through the midfield and passed to Mitchell Gilbey but his response was one of the factors as to why The Rocks are in so much trouble. He dithered and dallied and was dispossessed by the Town defender.

However, he made up for amends in the 7th minute when Sam Higgins produced a sublime back heel into the path of Mitchell Gilbey who drilled it away.

The Rocks were enjoying the surface and the atmosphere and made it pay in the 13th minute when, from a corner, Steve Sheehan floated high to nod the ball into the net.

Things got even better in the 19th minute when the clearly rattled Enfield were at sixes and sevens in defence led to an own goal by keeper James Chalk.

Enfield had gone from rattled to stunned and it got worse for them and better for The Rocks in the 25th minute when Mitchell Gilbey was able to get to the deadball line and slide it across in front of a flat-footed keeper and into the path of Neil Richmond who put it away.

Enfield eventually came back to life in the 39th minute when after a goalmouth scramble, Ryan Doyle hit the post and then Nathan Livings shot just went wide.

The second half started gently as The Rocks continued to dictate the pace but Enfield slowly started to dominate. In the 57th minute, Mitch Hahn headed in from close range and suddenly the game became a much more interesting affair. David Hughes produced a good save from close range.

But just as you thought Enfield may get back into the game, The Rocks had a slice of luck when after some great work down the left, Lewis Smith was tripped in the box. The poor penalty was saved by the Town keeper but Smith was sharp enough to bang in a re-bound.

Liam Hope scored a third for Enfield in injury time.