North to cycle south for charity

A FORMER Thurrock resident is cycling from Hartlepool to Thurrock in order to raise funds and awareness for HIV.

Karen North is now a Sunderland University student, who has made Hartlepool her home but she originally hails from Chadwell St Mary.

Karen was so taken aback by the effects of HIV/AIDS that she has decided to mimic a 545-mile bike ride taking place in the USA.

The 45-year-old will head from Hartlepool to Sunderland before taking in the popular Coast to Coast route to Cumbria.

She will then head for Essex via Preston, Stoke-on-Trent, Northampton and Chelmsford before reaching Thurrock.

Karen, who has never done anything like this before and admits she is not at her fittest, hopes to raise awareness of the incurable condition and to “help make lives better”.

Karen has been learning about the condition as part of her Sunderland University degree in healthcare science with cardiac physiology.

She hopes by taking part in the mammoth ride she will help to break the stigma surrounding the condition.

She aims to finish the ride in seven days, from June 1-7, coinciding with an event called AIDS Lifecycle, from San Francisco to Los Angeles.

Karen is taking part as a member of Team Goodisness, who are doing their own rides around the world, and hopes others will join her.

Karen said: “My degree has made me open my eyes to things around me, so I decided to do something different.

“For people who haven’t got it, they don’t know much about it,

“I think it’s because people don’t understand it because it doesn’t affect them personally – people don’t go looking for the information.

“I hope to raise awareness and help towards funds for treatment and make people’s lives better.”

Karen, who is mum to Stephen, 25, Kerry, 23, Liam, 22, Scott, 19 and 18-year-old Connor has previously climbed Ben Nevis to raise money for a children’s hospice in the south.

She is doing a placement in cardiac investigation at the University Hospital of Hartlepool and hopes to get a job there.

Karen, who will wear an Incredibles-themed fancy dress costume on the ride and be accompanied by son Liam in a support vehicle, added: “I’m looking forward to it, it’s a big challenge for me.

“I’m not the fittest person at the moment – I’m going to do a lot of training, if anyone can help me with training that would be great.” 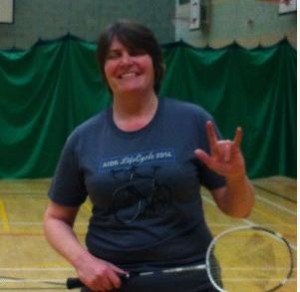