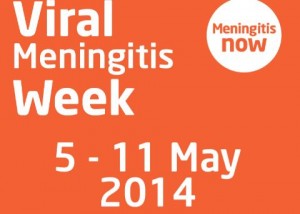 This year’s Viral Meningitis Week is all about getting people to talk about the disease, its symptoms, and its after effects, so this year’s strapline is #VocalAboutViral.

Launched in 2013 by the UK’s largest meningitis charity, Meningitis Now (formed from the merger of Meningitis Trust and Meningitis UK), this awareness week aims to improve vital awareness of viral meningitis and its true impact, after a survey showed that 97% of its victims are left with debilitating after-effects.

Often compared with bacterial meningitis as the ‘milder strain’, viral meningitis – an infection that causes inflammation of the membranes that surround the brain and the spinal cord – affects over 5,000 people each year. In 2012, the charity commissioned a survey, which showed that viral meningitis is leaving its victims with exhaustion, headaches, memory loss, depression, anxiety and hearing difficulties. Many sufferers have to take long periods off education or work and struggle with the day-to-day tasks that so many people take for granted.

The survey findings are helping Meningitis Now to work towards raising the profile of viral meningitis with health professionals, pharmacies, schools, employers and family and friends of victims, by informing them of the potential long-term difficulties sufferers can face.

The charity is aiming to dispel misconceptions that viral meningitis is always ‘mild’ and is calling for as much support as possible in order to achieve this. They are asking people to help raise awareness of the disease by talking about the disease online, verbally and in writing and by telling of their own experiences of viral meningitis.

Meningitis Now has a number of free services that are tailored to victims of viral meningitis; including funding complementary therapies, counselling, one-to-one support and home visits. Services can be accessed via the charity’s free nurse-led helpline on 0808 80 10 388 or www.meningitisnow.org/support.

Visit the website too for a viral meningitis factsheet, including signs and symptoms, and a summary of the survey findings.

Visit the official Viral Week page – http://mnow.co.uk/viral-week – for full details and to find out how you can get involved.